How to market yourself as a string player

You need flexibility and business acumen as well as talent to stand out from the crowd in today's rapidly changing music world, argues double bassist-turned-agent Corrado Canonici 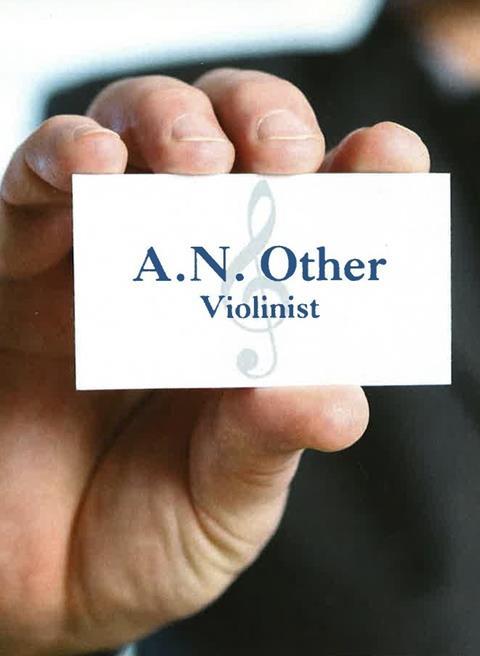 There are few who would claim that it’s easy to make a living in classical music. More and more well-qualified musicians enter the business every day, at the same time that orchestras, promoters and record labels are tightening their belts and the audience for classical music is getting older. Classical musicians of the future will need to know how to cope in this changed environment by developing their business skills, and by understanding how to connect with new audiences and genres.

Being a musician is good fun, as well as a meaningful activity. Musicians help people in their everyday lives with their music, which in itself is no small thing. If you plan your career well enough, you can support yourself and a family through music. However, achieving this is not straightforward: being a musician also means being a business person, and businesses can thrive or fail.

It’s a sad truth that talent alone won’t get you far. These days a musician needs to create a credible image, offer an interesting choice of repertoire, cultivate a very wide network and have a clear understanding of where he or she wants to be placed in the music world. I’ve seen many talented musicians not achieve what their talent deserved, mostly because they relied on only their talent and had almost no business skills.

Eight years ago I founded the artists’ representation company World Concert Artists (WCA). I initially thought that WCA would simply provide an income supplement to my full-time career as a solo double bassist, but bit by bit WCA has taken more of my time, energy and creativity, and unexpectedly it has given me a great deal of pleasure. By now I have fully accepted my ‘betrayal’ (as some colleagues perceive it) in making the decision to become a full-time agent. (My double bass career is on the back burner: I only play what I enjoy playing when I have time. But I still practise regularly: my technique is still solid!)

Classical musicians take a dim view of agents, who are obviously primarily focused on the business side of music. The general perception seems to be that agents sit in comfy chairs, take an undeserved ten per cent, and do not care about music – they only want the money. Yes, some agents are like that, but aren’t there people in other professions who are also like that? Selling music, just like selling shares, requires an office, assistants, telephones, computers, meetings around the world to enhance contacts (meaning hotels, flights, parking and taxi expenses), and so on. Being an agent is a professional job and as in any other profession, there are good ones and bad ones. Your task is to find a good one.

If you want to attract the attention of an agent (or a concert organiser), first do your homework: find out which agency might best further your career and check their artist roster (or check the concert season if you are approaching a concert organiser). Then send a well-crafted proposal with a brief covering letter and a promotional CD. Keep the length of the CD short, because agents are approached by lots of people. A 70-minute CD is likely to go in the bin more quickly than a 15-minute one (unless you suggest which pieces should be listened to on a long CD). And don’t overdo it: agents are practical people, and an experienced agent is able to smell a bluff from miles away.

Do not expect an immediate reply. In fact, expect to be ignored. Do not get angry about this; instead, keep trying. Bear in mind that today it’s much more difficult than it once was to create a career from scratch: everything happens so quickly and the pool of good artists has increased. This is good for the quality of music, but bad for new artists. They are like individuals waving from the middle of a stadium crowd – it requires much more energy to make themselves visible at all.

It’s likely that you will not have an agent for quite a while. Agents will get interested in you at a later stage, when you’ve done so many things that they cannot avoid noticing you. Concentrate your efforts on concert organisers to begin with. They are more likely to give you attention and may offer performance opportunities that could trigger further interest. When you play live, you should invite the agents that you consider to be interesting.

Many years ago I wrote to the legendary double bassist Gary Karr asking for his advice on how to further my career. He suggested hiring a publicist, only part-time, maybe just a friend who was well versed in marketing. Having someone who will regularly contact organisers, agents and journalists on your behalf can be extremely beneficial in building a career. If you hire a publicist, clarify how much you can pay, and how much they will work – and remember to check that they do the job.

Successfully connecting with an agent or a concert organiser is only one tactic in what should be a larger strategy of building your career. Classical music is a crowded profession and you will need to devote a lot of time and energy to simply getting noticed. It is impossible to provide a single template for success, but I can offer some ideas, based on my experience and the experience of people I’ve known.

Stay informed. Listen to new recordings, go to concerts, read music publications and follow the news. Know what’s going on out there. Don’t fall into the trap of practising in isolation and then missing the fact that someone else has already made your ‘new and original’ recording or played your concert programme. When I released my solo CD Roaring Flame in 2004, it was the first CD to feature classical contemporary music for double bass by British composers. Soon after the release (and reviews in national newspapers, music magazines and online), the record label received a call from another double bass player who told them he was going to record the first ever CD featuring classical contemporary music for double bass by British composers...

Try to experience as many different kinds of music as you possibly can. The music world is very diverse, so open yourself up to genres and styles that you would not usually consider. Contemporary music? Pop sessions? TV advertisements? And how about that strange improvisation night at a friend’s place? You will always meet people, and some of them may end up being beneficial to your career. I met some of my most useful contacts at some pretty unlikely musical gatherings.

Be broad-minded about your choice of music. The 21st-century music world certainly needs some degree of specialisation, but it also needs a very broad approach from musicians, who will be creating their careers and earning from an increasingly wide variety of sources. If you are not prepared to play anything but classical music, you may well find it difficult to make ends meet.

Know who you are. Seeking out different musical experiences and meeting new people is not just for networking purposes. There is also something deeper going on: different experiences help us find out who we really are. We may learn that contemporary classical is our thing – or pop sessions, or jazz, or who knows what else. Too many musicians are not doing what they really would like to do. They only discover their greatest musical talent or their real dream when it’s too late to redirect their careers – so the sooner you work this out, the better.