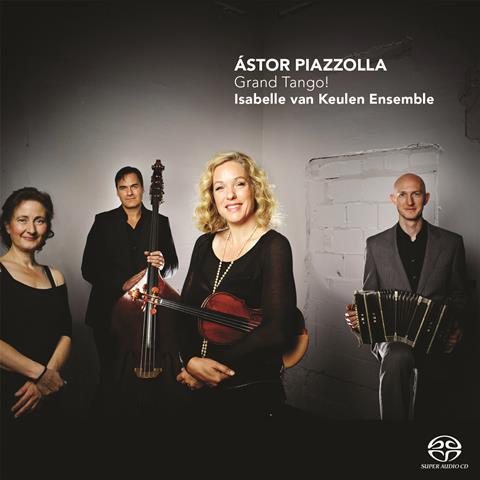 The Dutch violinist Isabelle van Keulen formed her tango nuevo ensemble to perform Piazzolla’s music at the highest standard. The ensemble made its debut CD and DVD in 2013 and once again fulfils van Keulen’s mission in style with its follow-up, Grand Tango!

The new recording has the same personnel and approach (though this is just an audio release): well-known pieces – here two movements from Piazzolla’s Four Seasons in place of the earlier disc’s Libertango – alongside other tangos from the hundreds composed by the Argentinian master. As before, van Keulen and her colleagues are the ideal interpreters of Piazzolla, reflecting his skill in the refinement, polish and accentuation of the modernist and avant-garde aspects of his music, all recorded in crystal-clear sound. Particular highlights are the breakneck Tres minutos con la realidad (‘Three minutes with reality’), with its Shostakovich-style pounding piano lines, and the searching, sublime two-minute bass solo that opens Kicho.

At twelve minutes the album’s title work is the lengthiest, composed for Rostropovich as a cello–piano duet and arranged here by bandoneón player Christian Gerber for tango nuevo ensemble. Its turbulent conclusion and simultaneous solo-style playing from van Keulen, Gerber and pianist Ulrike Payer display some of the finest music making on the disc.