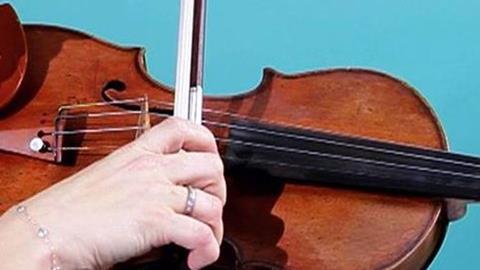 The problem of effecting a smooth and inaudible change of bow at the nut (most players do it well at the point) is one that long occupied the thoughts of our greatest teachers. The consensus seems to be that a very minute mixture of wrist and finger movement is the easiest and best way of bringing about the desired result. Large movements entirely defeat the objective and give rise to an audible change.

As the bow travels from heel to point, as well as the angle of the hand changing, the contact point of the first finger on the bow also has to change. Note that this change is never made consciously but happens naturally.

If this movement is restricted the give has to occur somewhere else. Typically the wrist becomes hypermobile, rising too high at the heel and sinking too low at the point. This excessive wrist motion is called ‘hills and valleys’ and can easily disturb the smooth passage of the bow

The movement of wrist and fingers are matters of the utmost delicacy and importance in the regulation of sound production, particularly where changes in bow direction are concerned. To fully appreciate this, one might, as a test, first attempt an up-to-down change at the frog with the wrist and fingers rigid. One quickly realises that a smooth change with consistent bow pressure is virtually impossible under these circumstances.

The hold must be at once solid and secure while at the same time supple enough to permit fine and rapid adjustments. A most crucial action of the wrist and fingers occurs at the frog during the legato bow change. In this, the behaviour of the hand and fingers resembles that of the bristles of a paint brush in a side-to-side stroke. Even as the arm begins to change direction (from up to down), the relaxed wrist allows the hand and fingers to lag behind so that, momentarily, they continue to draw the stick upward. Then almost immediately after the initiation of the down-stroke by the arm, the hand and fingers reverse and follow.

It is important to encourage more playing at the heel of the bow in young string players. This section of the bow is often ignored completely as the tone here is scratchy at first and the bow feels unbalanced. However, as with playing near the bridge, no really good sound can be produced and no smooth changes of the bow executed until playing at the heel has been mastered. Here the position of the little finger and the upper arm are of prime importance and must be frequently checked. The teacher must also give constant reminders to the pupil to reach the heel on every slow whole bow.

In smooth détaché strokes the bow speed and pressure are even, and the strokes are connected to each other seamlessly without a break or alteration in the sound.

To make a smooth bow change in simple détaché:

1. Very slightly slow down the bow an instant before the bow changes direction.

2. At the same time very slightly lighten the pressure

The factors that most commonly disturb the bow change are suddenly increasing the bow speed just before changing direction, lightening the bow excessively at the point or over-pressing at the heel.