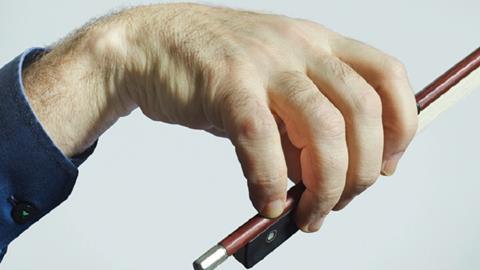 You do not need to try to develop flexibility in your hands and fingers. You already have it most of the time. Away from the violin, whenever you are engaged in everyday activities, your hands are relaxed and soft. You must keep that softness and flexibility when you play the violin. Athletes and musicians alike must guard against tensing up in the fraction of a second before performing an action, in preparation for it.

The components of the warm-up should address positions and tasks. The right hand’s work begins with reinforced awareness of a balanced bow hold and arm location, and continues with issues of smooth changes in all parts of the bow, control of speed and contact point, string crossings, bowing patterns, distribution, articulations, attacks, releases, dynamic range and tone colour.

Tension comes from within; the desire to ‘get it right’ and to play the music as the student hears it in her head can both be big contributors, so making it less important to ‘get it right’ is essential. Try singing at the same time as playing, so that the pupil is focusing more on the music and less on the physical actions. This will help make her body more relaxed. It may be useful to buy a small soft toy and put it in the bowing hand, telling her not to crush the toy as she plays. The advantage with this is that she can take the toy home and replicate the feeling.

What is the best way to hold the bow? There is no single answer to this question, since the exact bow hold changes constantly according to what you are playing. The question should be, ‘What is the best way to hold the bow to play what?’ To play very heavily or strongly, you might grip the bow quite solidly and spread the fingers more widely to get more leverage. To play with more delicacy, or to produce a particular dolce or special feathery sound quality, you might hold the bow so that there is barely any feeling of contact at all between it and the fingers; and allow the fingers to remain a normal, natural distance apart rather then spreading them out.

Part of the ever-changing nature of the bow hold is that at the heel the hand is more upright or supinated, balancing the bow with the little finger. At the point the hand leans in the direction of the first finger. Playing in this part of the bow the little finger may stay on the bow or come off, depending on the length of arm. Since the change happens gradually, centimetre by centimetre up the bow, from more upright to more leaning, the exact bow hold is slightly different at every place in the bow.

Read: Technique: Speaking with the bow

I suggest holding the bow between the thumb and middle finger. This allows you to hold the bow using mainly those two fingers. The weight of the other fingers can be applied depending on which part of the bow you are using. To find out which fingers are necessary in which parts, divide the bow equally into four.

*In the first part of the bow (near the frog), the main finger required to hold the bow in a horizontal position is the pinkie.

*In the second part of the bow, the main finger needed is the ring finger.

*In the third part, the middle finger is most important.

*In the last part (near the tip), the index finger is most important.

Of course, in practice such an exact distribution of finger pressure changes depending on what you are playing. Often you will need to press on the bow with several fingers at the same time.

Often, it can be useful to deal with the bigger ‘engine’ (the arm as a whole) before the smaller one (the hand or fingers). You could support the student’s elbow and wrist while his bow is on the string – his whole arm can then be relaxed. If you then take away your hands, you can test this – his arm will drop like a stone (but catch it!). He can then learn to ‘catch’ his own arm, and in this way he will feel how little effort is needed to hold the arm weight.

Placing the bow on the string at the heel enables the child to release his grip on the bow. He can take off individual fingers, even resting the length of his thumb on the violin, so he can feel how the strings will support the bow weight.

Read: Movement in the bow hand and wrist, by violin professor Boris Kuschnir

To find the relationship between the hand and the bow I begin by holding the bow vertically (with the tip above the frog), feeling how lightly and easily it balances in the hand with no sense of falling. I move my arm around and feel the connection. My hands and fingers are completely supple, especially at the base joints, and they cling to the frog like suckers. This is a very strong but flexible connection; the bow can’t be pulled away.

Next, I apply the bow to the cello, letting the string hold it up. The bow is balanced on the string and in my hand – I am not gripping it. I play a D on the A string until I find the natural resonance. If you hold the bow at the balance point of the stick you will get the clearest, most resonant sound. Then move your hand on to the frog and continue to produce the same ringing sound. Once you have found the natural resonance of the D, you can find it on notes without overtones.

If you place the pad of the fourth finger on the stick, the finger wants to straighten completely. Similarly, if the thumb is placed too much on the pad, it automatically straightens and becomes stiff. When it is placed on its tip, it naturally bends and retains its flexibility. There should be an imperceptible bending-and-straightening movement of the thumb in just about every bow stroke we play. If this flexibility is lost, the whole hand will lose its give.

Read: How to achieve smooth bow changes at the frog