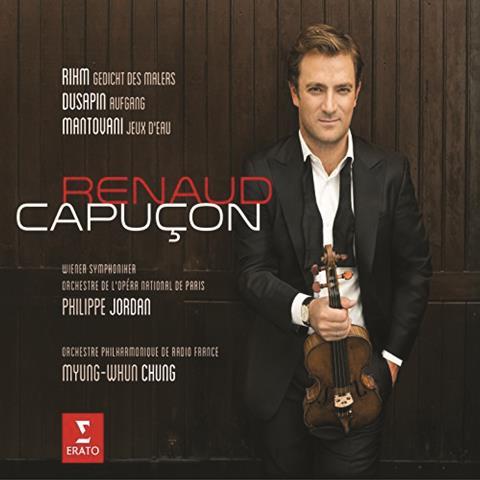 There’s no denying that this is a meaty disc: three serious-minded, large-scale new violin concertos, each dedicated to Renaud Capuçon (see interview in the last issue), and each captured at its world-premiere performance. Aside from the trio of thoroughly engaging works themselves – whose provocative tussles with tradition show that the violin concerto format is very much in rude health – what’s most impressive is Capuçon’s remarkably versatile playing, from keen musical storytelling one moment to sumptuous colouristic wallowings the next.

Wolfgang Rihm’s poetic Gedicht des Malers has an extraordinary lyricism and expressionist intensity that looks straight back to Berg’s Violin Concerto, and Capuçon plays with such freedom that it feels as if he’s improvising the whole thing. He brings silky-smooth, rapturous indulgence to the richly imagined solo part, though his tone has enough power and acidity when needed to cut through Rihm’s sometimes thick orchestral textures.

At half an hour, Pascal Dusapin’s Aufgang is the largest of the three works, but Capuçon paces what feels like a slowly unfolding succession of character episodes expertly in a strongly projected, vivid account. And he’s more than a match for the skittering, unpredictable solo part in Bruno Mantovani’s surprisingly aggressive Jeux d’eau, a world away from the delicate evocations of Ravel’s piano work, matching muscular sensuality with finely etched articulation.

Capuçon gets impeccable support from his three orchestras and two conductors, although these live recordings – especially close in the Dusapin work – feature quite a bit of extraneous audience noise.