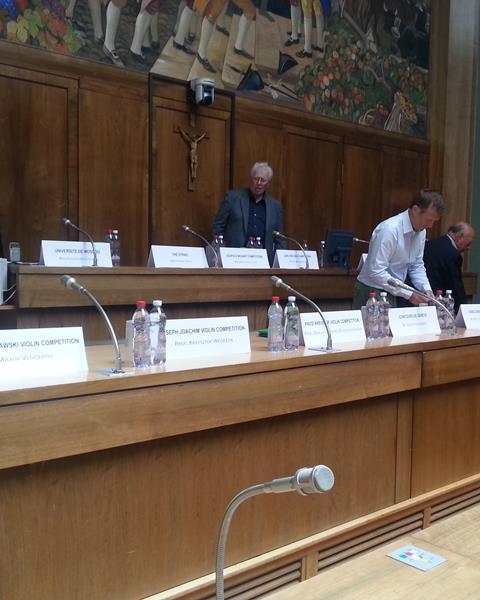 It’s a strange feeling going to Switzerland for the day. The 4am-dark suburban streets of Heathrow Airport’s environs are replaced by overwhelming green mountain scenes as the train from Geneva Airport passes Lake Geneva, past pretty little houses and chalets. And before you know it you’re back in dark London, and it’s as if it’s all been a dream.

A strange dream in my case. My flying visit was to take part in a panel discussion that was the brainchild of Pavel Vernikov, who this year has taken the reins of the Sion Festival. Vernikov is trying to introduce new and challenging ideas to the festival format and one of his preoccupations is to examine the concept of the violin competition. He’d assembled an impressive panel of ten directors from the most prestigious violin competitions, as well as me and another journalist and we had three hours to discuss the nitty-gritty. Even that wasn’t really long enough to come to any conclusions.

The format may have been a bit unwieldy, with twelve of us all setting out our stands, followed by general discussion, but nevertheless it brought up interesting areas about the nature and future of violin competitions, as well as some of the practicalities.

The discussion was prefaced by the famous Bartók quote about competitions being for racehorses rather than artists, and the directors were asked to explain what they do to avoid this charge. I’m not sure all of them really did answer it head on, but as they explained, the various competitions each offer some sort of specific musical emphasis, and certainly the inclusion of chamber music and contemporary music rounds and other innovations that some were able to cite count for something.

There was also much talk of how to manage the preliminary rounds to make sure the interesting players come through, rather than just the technically perfect ones, the aim being to avoid that the same type of player always wins. There was some discussion of the mechanics of this, Maxim Vengerov popping in briefly to discuss his experience of both sides – as a competitor and as head of the jury of the Wieniawski competition. He highlighted how deceptive CDs and DVDs can be, which you might only realise once you have the players in front of you. Video technology can also be a useful tool, but there was a discussion about how inconsistent the quality can be and how hard – exhausting even – the judging can be by this means.

There was general agreement that the quality of a competition is also made or broken by the quality of the jury. This often comes down to sheer pecuniary realities, though. Of course you want successful, busy musicians on a jury, but for this you need to pay them well and put them up in nice hotels and send them first class, and if you don’t have much money this might impact on the length of the competition, which might affect who applies.

This financial aspect led to the question of whether there is a ‘turning table’ of certain judges who move from competition to competition, and the effect this has on the variety of musical outlooks. It was generally seen in a negative light, although the point was made that some people do make good jury members and inevitably these directors will be competing for them. But who should sit on juries – teachers, players, top soloists, industry professionals? Some of the competitions have tried with variations thereof but there were no clear conclusions.

The subject of jury members judging their own students came up and some people explained that they’d banned this in their competitions, rather begging the question whether everyone has banned it, and if not, why not. I’d assume that if you’re seeking to be fair, this is an absolute prerequisite.

The question of who should sit on juries and even whether to have different types of juries was vexed. One of the directors was against having the audience involved on the basis that the public isn’t well enough informed. That rather pushed my buttons, and I jiggled in my chair and waved my arms around in order to be allowed to answer.

When it comes to great artistry, I’m pretty sure that most audiences can tell the difference between a good artist and a truly great artist, maybe even more directly than someone who has phenomenal knowledge of string playing and music but can’t see the wood for the trees. I made the point that throughout history, from Paganini through Ole Bull and Heifetz through Joshua Bell and Nigel Kennedy, the ‘public’ knows true art when it hears it. And if we’re going to open up classical music to more people, we have to respect their judgement and make them part of key musical moments – if we want competitions to be key musical moments. (That’s not to say that this taste can’t be perverted or distracted, but that a true artist can connect with anyone. Nor is it a manifesto for ‘dumbing down’ – quite the contrary.)

I also cited the research we reported here that indicates that when asked to judge videos of performances with the sound off, expert and non-experts actually come to the same decisions about winners; and they do so based on visual stimuli rather than necessarily sound, anyway. One director made the interesting point, which backed up my view, that in his competition, when the jury is unanimous about a choice, the audience always agrees about the winner. When this doesn’t happen, it’s usually a sign that there wasn’t a clear winner for the jury either. My point was rather academic though, given that most competitions have some sort of audience element, whether it’s just some sort of quick ballot, or at the other end of the scale, public interaction and judgement through social media.

A couple of possible alternative or additional formats were mooted. One audience member suggested a system whereby the contestants themselves judge whom they think is best in their round, obviously not being allowed to vote for themselves. This was an interesting idea – I’m sure that students are quite clear about their own strengths and weaknesses and those of their colleagues. But it was pointed out that it’s very rare in competitions for contestants actually to listen to each other, given the pressure to be practising for the next round. Still, an innovative concept.

The final idea, suggested by Vernikov in his summing up, was some sort of system whereby there would be no juries at all, but the winners would be selected by competition directors. I was unclear whether he meant this to include actual rounds or whether it was all done behind closed doors. If the latter, it sounds rather like the format of London Music Masters, which, as far as I understand, canvasses key people around the world – conductors, conservatoire directors, venue managers, agents – about any special players they’ve come across, and then takes the selection process from there, without a competition as such. This is also an innovative solution, but one that is more of a selection process and scholarship than a competition.

Before I went I did a straw poll about attitudes to competitions (using the refined research tool that is Facebook) and unsurprisingly there was quite a lot of negativity towards them, on all the obvious grounds and ones mentioned – it’s not as if competition administrators don’t know these issues. Personally, I don’t have a problem with competitions as such. For players they can be a useful means to an end, providing motivation, exposure, performance practice, positive peer pressure, as we discussed in this article. For audiences they can be exciting, inspiring and informative – and some competitions are also