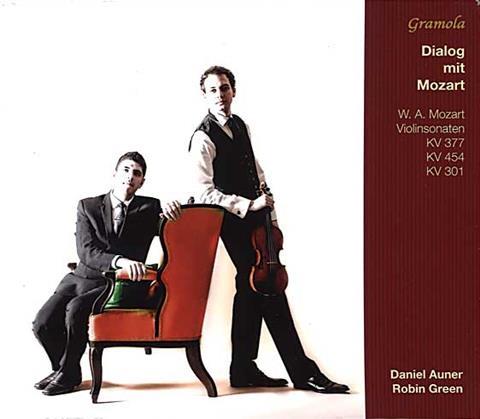 Violinist Daniel Auner has spent time among the Mozart manuscripts, scrubbing away the corruptions of editions and accepted practice. He is hardly the first to do so, but there are various tweaks to the familiar repertoire on this excellent CD. He and his partner Robin Green have also made up stories to go with the music, but mercifully they don’t show.

Auner begins with a bubbling performance of K377 in F major, playing with a light touch and an engaging tone, with nicely judged vibrato giving genial warmth. The balance and interplay between the players is exemplary, aided by the clear, close recording. There is a winning simplicity to these performances: the minuet of K377 is full of light and space, the dynamic range modest but with plenty of contrast.

The Allegro second movement of the G major Sonata K301 has an easy elegance, unhurried and courtly. In the central sonata on the disc, the B flat major K454, Mozart treats the players as equals, and here the playing has style and character in abundance. The lilting phrases of the Andante are beautifully pointed, and the final Allegretto, with its touches of Beethovenian humour, is sprightly and warm.