Why do so many orchestras lag behind the beat?

Even under the best conductors and in the finest orchestras, players tend to drag behind the baton. Evan Johnson looks at the reasons for this universal phenomenon 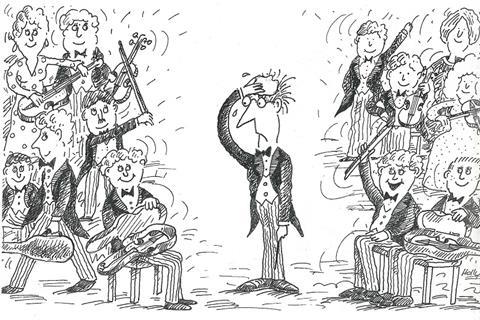 Conductors often urge orchestras not to play behind their beat, but players, though they may respond by looking more attentive, often continue to lag. Some conductors interpret this as incompetence or insubordination, yet it happens in the finest orchestras, some of which even have reputations for playing far behind the beat. The amount of lag varies in different situations, but the tendency is universal - and is seldom satisfactorily analysed or addressed.

Skilful conductors learn to manipulate their orchestras to get most of what they want, but the lag phenomenon can be frustrating. A conductor may be unable to make delicate tempo adjustments or phrasing nuances if the sound is not reliably aligned with the stick, and players who wish to follow a conductor carefully are often thrwarted by the unyielding momentum of the group. At endings or transitions, there is often a mysterious group momentum which determines the pace of tempo change and has only a vague connection to the movement of the baton.

We observe a similar phenomenon waiting behind other cars at a traffic light. The light turns to green, but we cannot move until the cars in front of us have reacted one by one. Cars are not warned when the light is about to change; orchestras have the advantage of a preparatory gesture, but are still often late to the down beat. To come in accurately, a player must guess how late the group sound will be to the visual cue. The conductor must not react to the lag, but continue to beat steadily, placing each beat the same amount early.

String section leaders are often frustrated by the lag from the backs of their sections. They have to play later than their own body cues and the beat directly over their heads, to avoid sticking out in front of their section's sound. Playing at the back can be just as distressing. Sometimes players stop looking at the conductor completely, to avoid a dizzying double image: seeing one thing and hearing another. Playing syncopations under such conditions can be nightmarish.

The low and loud sections of the orchestra - cellos, basses, and brass - seem especially susceptible to dragging. A commonly hear explanation is that these instruments 'speak a little late'. However, this absurdly implies that players are unable to take this effect into account.

Another explanation for lag is that the sound produced by instruments at the back of an orchestra takes longer to reach the front. This theory also collapses with a little observation. For example, I once heard the opening bass pizzicatos of the Passacaglia from Lutoslawski's Concerto for Orchestra sound exactly with the conductor's beat. Sitting in the back of the violin section, at the opposite side of the stage, I expected the different speeds of sound and light to make even precisely played notes seem late to the visual cue. But my impression was of exact synchronisation. In contrast, the slow sections of the Berlioz Corsaire Overture, on the same programme, oozed far behind the beat. The laws of physics are irrelevant. Musicians can play with a conductor when it is really necessary, as in a particularly exposed and brittle passage. But when there is more margin for error, they easily abandon the beat.

The shape of the beat may add to the problem. The haphazard gestures of some conductors defy precise readings. A crisper design may have so much energy in the after-swing that the crux of the beat is still ambiguous. However, when watching one of those rare stick techniques which beautifully outlines the beat, players are apt to be late. If the conductor were playing in a string quartet and giving cues with a bow, the other quartet members would be ludicrously behind. Of course, the crucial difference is that a baton does not produce sound.

A player's first allegiance must be to those who are producing the sound. Conductors who berate players for not following their gestures forget that they can never be as closely linked to players as players are to each other. A good player will never follow a visual cue if that would jeopardise the ensemble. Though conductors may perceive it as thwarting their will, this sense of ensemble bonding is essential to a clean and solid performance.

Players resent heavy-handed attempts to pull a sound web into a different shape with visual cues. They sense how jarring it would be if the conductor's intrusions were audible. If one or two people try to bend their sound in the direction the conductor wants to go, they instantly have to fall back within the group's boundaries or risk raggedness. If everyone does not move at exactly the same time, in exactly the same way, then the group sound does not move either.

The players' instinct for good ensemble is akin to a desire for comfort and safety. The more solid the ensemble, the more a player can relax within the framework of the group sound. Safety in a group may explain why the sound starts off behind the stick. Players need to sense the edge of the group sound before completely committing their own. This may mean the merest fraction of time when the music is fast and vigorous, or an appalling delay when it is slow or delicate.

Players may feel even safer when they perceive the conductor's intent a little before they perceive the group's intent - when they can examine the beat for a moment before reproducing it. They are thus doubly insulated from the embarrassment of being heard outside of the group sound. Players at the back of an orchestra may hesitate even more to project their sounds when the intentions of the conductor and of the other players are so diluted by distance.

The beat can occasionally elicit sound simultaneously, if stronger emotions override the players' inhibitions. A conductor's anger in rehearsal can cause synchronisation for a few moments. So can the absolute dependence on the beat for ensemble, as in the Lutoslawski example. However, the intensity of concentration or the emotional involvement needed for this precise co-ordination may be too exhausting to maintain. It may also seem unnecessary once the danger is past, if the ensemble is satisfactory without the extra effort. The players' allegiance to the sound web reasserts itself quickly, and returns the conductor to a more inspirational or decorative role.

Players fall into the visual trap too, by demanding clearer cues and maintaining that they depend on the conductor to hold them together. They grumble that if the conductor would only 'show us' more clearly, the ensemble problems would cease. A conductor's beat can indeed be essential in complex or unfamiliar music. But obsession with the stick can often distract from the more reliable process of listening for what parts must fit together.

A conductor's primary function is not to maintain a beat, but to focus the attention of the players. Given the players' allegiance to their ensemble bond, a conductor's biggest challenge is to set up the conditions for bonding in the desired way. Colourful verbal descriptions and images can maintain the players' interest in shaping phrases. Facial expressions and gestures can encourage their alertness and emotional involvement. Careful analysis and consistent rehearsal of problem spots can develop the players' natural concern for aural precision and accustom them to a particular result.

However, ensemble glue sets quickly, and conductors would do well not to keep meddling with the bond. Those who try to change a tempo, once it has been established, seldom achieve more than anxious looks from the players. Conductors may provide inspiration and leadership but must give up the expectation that the music should flow perfectly from the baton.

On the other hand, players may not simply assert their independence from visual regulation. The problems and pleasures of producing sound on an instrument and of meshing with colleagues all too often distract from the necessity of fitting into the larger musical framework.

The bonding instinct can be disruptive if it occurs only in one section. There may be a technical reason for this. Sometimes players fall into whatever tempo feels most comfortable for certain passagework. Sectional pride and the satisfaction of good ensemble with colleagues can also contribute to this inward focus. But the simplest reason for sectional bonding is that nearby sounds are the clearest and provide the easiest reference points. If the successful execution of a trick passage is at stake, the person waving the stick in the distance has even less influence, and is sometimes screened out.

Playing with a click track clearly demonstrates how selective a player's attention can be. Staying with the click takes a surprising amount of conentration, and players easily stray from what seems to be a very simple task. Players would not hesitate to acknowledge that they could follow the click better with a bit more effort. Perhaps they could follow the conductor better, too. Though a plausible explanation of lag in the low and loud instruments may the the greater difficulty in hearing beyond the density of sound, the weightier issue is the difficulty of forcing our attention outward, beyond out immediate perceptions.

Players of high and softer instruments can clog the musical gear just as easily by a preoccupying immersion in their own sounds. The conductor is the only thing everyone can perceive with the same clarity. Players who do not make the effort to peek over the comfortable wall of nearby sounds make life more difficult for everyone.

Though visual information may not be as compelling or as comfortable to a musician, it can certainly be useful. Watching the bows or fingers of other players can sometimes help solve an ensemble problem when it is really impossible to hear. Watching the conductor can be useful, too. Players may find clues to ensemble problem they might not be hearing, if they try to become more sensitive to exactly how far ahead the beat is, or to how upset the conductor seems to be getting.

Perhaps what is really needed in these situations of mutual antagonism and frustration is a little more communication and discussion. When co-operation and respect combine with musical inspiration these technical matters can seem trivial. Occasionally, conductors and players are so immersed in the music and so attuned to each other that everyone ends up satisfied. It is for these rare moments that we keep making music.

This article was originally published in August 2014