US restrictions on sales of ivory-tipped bows will place unreasonable demands on owners and strip essential music tools of their value, says violin maker and dealer Jay Ifshin 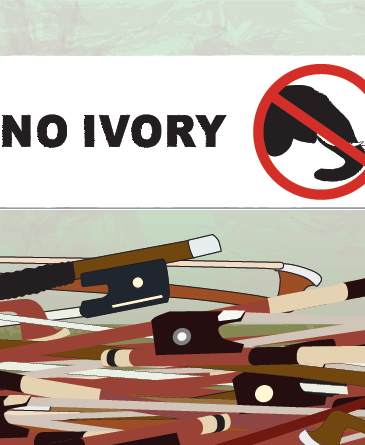 No one should underestimate how disturbing the Obama administration’s ivory ban order is for the world of classical music. Bows are already being seized from international musicians coming to the US – as happened to the Budapest Festival Orchestra in June – merely on the suspicion that they contain banned elephant ivory. Customs agents cannot easily distinguish between illegal ivory and the legal white-coloured bow tips that bow makers have been making for the last few decades using prehistoric mammoth ivory or synthetic materials instead of elephant ivory. So it is easier for officials just to confiscate any questionable bow.

However, it is not just travelling orchestras and individual musicians who are adversely affected. Alongside new rules restricting the import and export of instruments and bows containing ivory, restrictions on domestic sales will severely affect many US owners of ivory-tipped bows that were acquired legally years and even decades ago. At the time these bows were purchased or first brought into the US, no paperwork was ever asked for or required. These bows have been used on a daily basis by working musicians. Now these musicians and their adult children, as well as collectors, are being told that they can’t sell their bows without some kind of proper documentation. How can musicians or collectors be expected to produce paperwork that never existed?

Many musicians have been counting on the sale of their bows and violins as an important part of their retirement. During those years of daily playing, both antique bows (more than 100 years old) and vintage bows (less than 100 years old) have increased dramatically in value. It is not uncommon to find a fine Dominique Peccatte bow priced at $150,000, for example, or a François Xavier Tourte at $400,000. Early and mid-20th-century bows by makers such as Sartory or Fétique are seeing prices between $20,000 and $40,000.

Most working musicians are not well paid. Now, unfortunately, they risk being criminalised. Because of the new legislation, the bows can’t be sold or, in some cases, even transported because of a tiny piece of ivory. Even if the ivory were to be removed, which can be risky, and replaced with a synthetic tip, the value would be diminished because the bow would no longer be all original.

Confiscating a violin bow made 75 years ago that was bought legally at that time and has been in constant use in the US ever since will do very little to stop current elephant poaching.

I bought a violin bow many years ago from a man who had been stationed in France at the end of the Second World War. His wife, an orchestral violinist, asked him to buy her a bow made by the finest maker he could find in France at that time. He presented it to her upon his return to the States: it is a rarity because it is branded with the year 1945. Most bow makers, if they branded at all, usually only used their name and not a date of manufacture. This bow, though clearly and without question manufactured and brought to the States long before the legislation, would be deemed unsalable and valueless.

Musicians and collectors also need to be concerned about the tax, insurance and estate issues that will unfortunately and inevitably arise with the new legislation. If a bow becomes instantly and permanently unsaleable because it lacks old paperwork, what value can it be appraised or insured for? Will insurance companies even bother to insure the bow if it is ‘illegal’?

There must be an exemption to the legislation for vintage and antique bows – an exemption that excuses the owners from the requirement to produce paperwork that in most cases never existed and is in almost all cases impossible to produce.

Musicians today should not be held responsible or penalised for actions in which they had no hand, but on which their careers rely. An exemption for vintage and antique bows would maintain the integrity of the existing protective laws. I see this small change as a way for musicians, conservationists and lawmakers alike to move forward on this issue.

This article was published in The Strad's August 2014 issue