Postcard from South Africa - ‘What It Takes: Double Bass’ 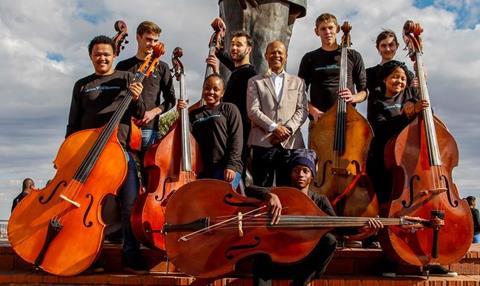 The South African National Youth Orchestra’s (Sanyo) ‘What It Takes: Double Bass 2018’ event took place at Jan van Riebeeck High School in Tamboerskloof, on the slopes of Table Mountain in Cape Town from 9 to 12 December 2018. With 23 participants and an international faculty of seven, this was the first course of its kind in South Africa, and almost certainly signals a turning point for double bass in the country.

The instrument-specific What It Takes events, launched in 2014, are the brainchild of the orchestra’s chief executive Sophia Welz, and are designed to benefit not just the young musicians of Sanyo, but also their teachers and other interested parties. The courses cover many aspects of professional musicianship, including ‘audition preparation, marketing yourself as a musician, posture/injury prevention, performing with an orchestra, music history related to your instrument and individual masterclasses from top professionals’.

There exists not only the desperate need for expert tuition, but a crippling lack of access to decent instruments

In order to combat social and economic inequalities in South Africa, a crowdfunding campaign, philanthropic donations and a benefit concert promoted by the Arco String Project and hosted by the Royal Birmingham Conservatoire ensured that every place on the course was fully funded. In addition to the bassists of Sanyo, participants from across the country included school-age musicians, university and music college students, two young professional musicians – Jonalene Taylor from the Free State Symphony Orchestra and Siyolise Nyondo from the KwaZulu Natal Philharmonic Orchestra – and Nico Kruger, a veteran of the South African freelance world and member of the Johannesburg Philharmonic Orchestra.

Bradetich, Raschen and Scales worked tirelessly to resolve participants’ technical and musical challenges, and to allay their anxieties; the three essentially tried to teach instrumental techniques in the space of four days that ordinarily require a lifetime to master.

Because many young South Africans experience profound economic disadvantage, there exists not only the need for expert tuition, but also a crippling lack of access to decent instruments and musical resources. So I was pleased to distribute donations of music, strings and other accessories from my professional colleagues and friends in the UK. My own contribution to the proceedings was in three parts: a masterclass in which the participants performed music by Dittersdorf, Capuzzi, Marcello and Norman Hester; the launch of my ‘Accelerated Learning Algorithm’; and a talk about The South African Double Bass project.

My four-stage algorithm requires no more than the faithful execution of each successive step to achieve the desired outcome. Stages one and two deal exclusively with technical challenges, stage three contends with the intellectual questions of structure and syntax, and stage four contemplates the ultimate aesthetic challenge of how to make music meaningful. The brief practical application of its fundamental principles during my masterclass produced immediate results: we were able to transform dramatically Nico Kruger’s performance of Dittersdorf’s Concerto no.2 for example.

There are two parts to my South African Double Bass project. The first seeks to encourage an intellectual and philosophical approach to the performance of music, expressed through a distinctive concept of sound that originates in the geography, history and politics of the country. The second encourages the development of a rich resource of compositions for the double bass by South African composers.

Paul Hanmer’s Scratch-Pad-and-Six for double bass and piano, composed for me in 2014, was almost certainly one of the first compositions for double bass by a fellow South African, but I now have more than two dozen compositions from some of the most distinguished composers in the country, and there are more to come. Every What It Takes participant also left determined to have at least one new piece written for them, too, and I look forward to hearing all of these.

In a public gala concert at the Erin Hall in Rondebosch, entitled Double Bass Delight, members of the faculty were given the chance to perform. Steffen’s spirited and superbly characterised performance of the Marcia movement of Nino Rota’s Divertimento for double bass and orchestra set the tone for an uplifting evening of music making.

Raschen, who herself has South African roots, performed Bottesini’s Elegy and Piazzolla’s Contrabajeando, while Scales’s eclectic contribution included François Rabbath’s Ode d’Espagne, two movements from Handel’s Sonata op.2 no.8 for two cellos with his ex-student Britz, Knut Guettler’s Variations on Greensleeves and Joseph Kosma’s improvisation on Autumn Leaves. Bradetich performed two movements from Bottesini’s Concerto no.2 in B minor and some Shostakovich duos with Raschen, and the concert concluded with an energetic account of Daryl Runswick’s Strauss in the Doghouse for double bass quartet.

The 23 participants contributed to a lively closing afternoon concert of music encompassing a great many permutations of double basses in ensemble, followed by a traditional South African braai (barbecue) in the glorious Cape summer sunshine.

For me, what distinguishes young South African bassists from the hundreds I have met and taught around the world, is their fierce determination, honesty, insatiable curiosity, willingness to learn, and unbounded enthusiasm, often in the face of monstrous challenges.

The South African Double Bass Society (bit.ly/2HVKeWj), born from this passion for the instrument, seems destined to grow stronger and will, in time, forge links and collaborations with other double bass societies around the world. South Africa has successfully hosted international sporting events like the football World Cup, and my suggestion that Cape Town might in the future host an International Double Bass Convention has not fallen on entirely stony ground.

The author wishes to thank Liz Hosford and Paul Sherman for their generous donation to What It Takes: Double Bass 2018.