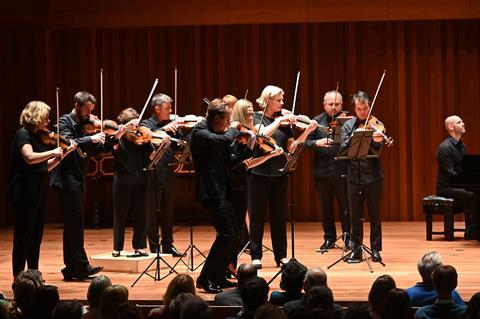 The Australian Chamber Orchestra, currently the International Associate Ensemble at Milton Court, performed a set of three concerts in October under its violinist/director Richard Tognetti, of which this was the last, and for which it was joined by the Guildhall Chamber Orchestra.

After a moving account of Pēteris Vasks’s Viatore, arranged by Stefan Vanselow for eleven solo strings, they launched into a spirited account of Britten’s Variations on a Theme of Frank Bridge, marked by constant brilliance and colour to match the kaleidoscope of Britten’s invention. Here was a brittle, dry March, a slinky Romance, and the players all grinning as they played à la mandolin. To follow, Tognetti performed, and directed, Vaughan Williams’s The Lark Ascending. His lark appeared in a rather loud burst, with some strong thrusts to come: this was not a bird to be messed with. His playing was powerful and rich in vibrato, accompanied by colourful playing from the orchestra.

In the second part of the concert came a performance of Schoenberg’s Verklärte Nacht, a technically superb account that suggested a lot of very careful rehearsal. The ensemble made a terrific sound, with some scary Hitchcockian passages before the transformation. It was dramatic and beautiful.