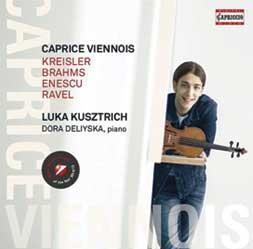 A former pupil of Dora Schwarzberg (he is currently studying with Gerhard Schulz), Vienna-born Luka Kusztrich is clearly a young talent to watch. A sequence of Kreisler miniature morsels may currently lack the opulent tonal luxuriance of Itzhak Perlman (EMI) or the composer himself, yet Kusztrich possesses a natural flair for the idiom and a melodic insouciance of a kind that cannot be taught.

So fiery and temperamental was the playing of gypsy violinist Jelly d’Arányi, dedicatee of the finger-breaking Tzigane, that Ravel remarked exhaustedly after hearing her: ‘I don’t know what she’s doing – but I like it!’ Kusztrich and his gifted playing partner Dora Deliyska may not hurl themselves into the fray with the delirious abandon that was d’Arányi’s interpretative trademark, yet they savour the music’s chameleonesque changes of direction with alacrity, embracing some magical moments of ear-tweaking textural interplay along the way.

To finish, Enescu’s Third Sonata ‘in the popular Romanian style’, played with captivating neo-Classical integrity. Kusztrich exchanges the 19th-century rhetoric of traditional readings in the Menuhin mould for a biting concision and modernity, enhanced by the crystal-clear recording, which arrests the attention from first note to last.