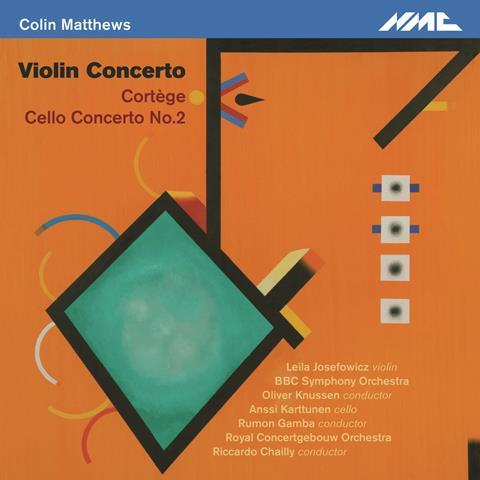 Colin Matthews wrote his Violin Concerto – the headline work on this disc – in 2009 for American virtuoso Leila Josefowicz. Here we have the 2010 BBC Proms performance with the BBC SO and Oliver Knussen. It is difficult to imagine a more sympathetic account or better sound, and you’d never know there was an audience present. When it comes to traversing the post-Britten–Tippett British landscape, the Faber Music school will surely represent continuity as well as provide some of its finest mainstream achievements. Matthews may not have established as many repertoire regulars as Adès, Benjamin or Knussen but, along with elder brother David, his substantial output has been gathering steady recognition over the last decade or so and this 70th-birthday celebration can only strengthen his reputation.

The earliest work here is Cortège (1988) in a 1998 recording from Amsterdam’s Concertgebouw. This is a profound and powerful construction which Riccardo Chailly captures with visceral, Mahlerian intensity. The Second Cello Concerto was written for Rostropovich and the LSO and premiered in 1996. Imaginatively cast as a continuous five-panel arch, the music unfolds with passionate lyricism within a well-articulated orchestral framework. If Anssi Karttunen in a Maida Vale BBC recording doesn’t quite cut through with the eloquence expected of the dedicatee, this gripping account should certainly serve to put the work on the map and get the further performances it deserves.