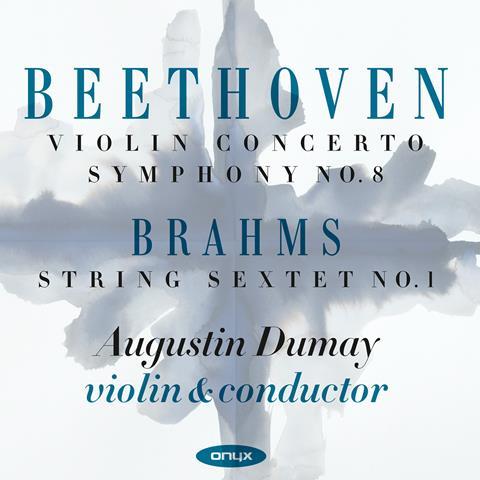 Augustin Dumay’s musical attributes are demonstrated here in solo, conducting and chamber roles. †¨He marries musical insight with technical security in his account of Beethoven’s Violin Concerto, realising its high-tessitura melodic material with expressive lyricism and tonal purity. His reading is spacious and supple, even if he sometimes seems to coordinate with the orchestra rather than vice versa, and his fairly traditional view of the first movement has a natural fluidity of line, ebbing and flowing with the music’s changing demands. He forces the sound somewhat in Kreisler’s cadenza and is less tender than many competitors in the intense Larghetto; but his buoyant finale skips along the more infectiously, thanks to light, clean articulation, and he rattles off the final cadenza with considerable panache.

Dumay and his chamber colleagues revel in the dark textures and moods of Brahms’s First Sextet, especially in the lyrical opening movement and the intense minor-mode variation set that follows. They also convey the energy and humour of the rustic scherzo and realise its more animated trio with aplomb. However, their ensemble is not always unanimous, their tonal blend is often uneven and their intonation lacks the precision and uniformity of an established group. The recording, though vivid and immediate, is a shade too present.

Dumay the conductor makes his orchestra live dangerously in Beethoven’s Eighth Symphony, injecting a real sense of forward momentum in most movements, particularly the first and last. Recorded live, this performance is in many ways exhilarating but suffers from poor balance, untidy ensemble and much skating over detail.