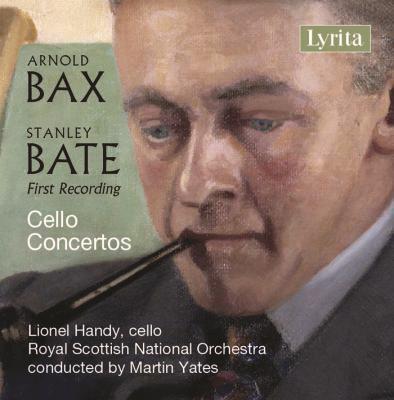 This recording represents a milestone for two neglected British cello concertos of the last century: the recording premiere of Stanley Bate’s Concerto and only the second recording of Bax’s since Raphael Wallfisch made his version in 1987.

The soloist in Bax’s work must have a strong musical presence, which Lionel Handy inhabits forcefully, from his declamatory opening solo statement, through elegiac high-tessitura playing in the Lento, to the emphatic theme of the Molto vivace. The orchestration is classic Bax, with its magical and original textures brought out by committed playing from the RSNO and clear, well-balanced recorded sound.

The music of Stanley Bate, one of Vaughan Williams’s pupils at London’s Royal College of Music, was more well-received in the US than in his home country; thus it was in New York that his Cello Concerto was premiered in 1954. With its wide-ranging and fast-moving solo part, this is an instantly engaging work. Bate writes well for the medium and Handy is again a convincing advocate, playing its eloquent solo line with most expressive vibrato, although his intonation is imperfect in the opening theme of the last movement. With parts produced by Handy now available to hire, maybe the work will finally find a following.