Composer, arranger and producer Craig Leon describes working on Bach’s Toccata and Fugue in D Minor BWV 565 with violinist Jennifer Pike and Moog Modular synthesiser. Listen to the recording below: 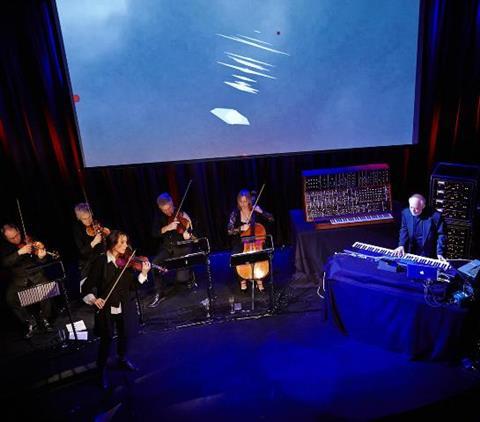 ‘Bach to Moog’ was first discussed in April 2014 when I performed my piece, Nommos, at Moogfest, a biennial celebration of synthesised music which takes place in Asheville, North Carolina, US. I performed the piece with synthesisers, string quartet and percussion tape loops.

After the performance I had a discussion with the folks at Moog Music about creating a recording that would coincide with two significant events that they were going to be celebrating. The first was the 50th anniversary of the creation of the Moog Modular synthesiser which was occurring in 2014-15. The second was the upcoming 10th anniversary of the death of Robert A. ‘Bob’ Moog , their founder , who was the pioneer who brought the synthesiser to the world’s musical stage.

What came out of the discussions was a project that would involve using Moogs in an interpretation of the works of Bach. The classic record album ‘Switched On Bach’ which featured solo synthesiser performances by Wendy Carlos was issued shortly after the creation of the first Moog modular synth and was the vehicle which introduced the synthesiser to many musicians, myself included, and music listeners.

For the anniversary events Moog Music manufactured a carefully reconstructed version of the Moog modular 55 which, though not the actual instrument that was used on ‘Switched On Bach’, was very close to the original instrument on the recording. This was the instrument that was to feature on my project and indeed I would be the first person to record with it.

I was faced with the daunting task of ensuring that the piece was not simply another retro version of the original ‘Switched on Bach’. That was an album that has stood the test of time and remains a classic to this day. It is even performed now in the UK by Wendy Carlos Tribute Ensembles.

Instead I wanted to find a place for the synthesiser as an equal to acoustic instruments in the modern recording environment, both as a solo instrument and as a member of an ensemble. Doing research with theremins and a DI’d string bass as an audio source for processing via the Moog, I felt that string instruments would be the most useful for my purpose.

The arrangements were written for small string ensemble, solo violin and solo Moog, using Moog as a processor for the acoustic instruments. It was important to create a dialogue between the solo instruments so I divided the melody lines into two solo lines and used unison passages where it was appropriate.

For me the most challenging yet effective piece was the Toccata and Fugue in D Minor BWV 565. There are unproven theories that this piece was originally intended as a violin solo composition. An arrangement exists in the solo violin repertoire but it transposed the key to A minor which I felt destroyed the impression of the grandeur and majesty (or for those of little musical imagination the ‘Gothic’) nature of the original.

So I went back to the original key and arranged it with the Toccata as a duet for solo violin and solo Moog with the ensemble entering for the Fugue.

In practice we had to be quite particular about the attack and bowing in the violin part as well as the execution of the Moog lines. The Moog 55 is a monophonic instrument and one normally creates sounds on it by slightly detuning oscillators against each other to create the ‘typical’ Moog sound.

This was not suitable for my purposes as it was paramount to have the intonation of the Moog and the acoustic instruments match as closely as possible, bearing in mind that the electronic instrument did create varying start times of individual notes and in some cases varying pitches when performed.

The recording was then done in several phases:

First after lengthy rehearsals and discussions with Jennifer Pike, the soloist on the recordings, I played a skeletal Moog guide track as a template for the rest of the recording.

We then recorded the Fugue with the Sinfonietta Cracovia and Jennifer playing together in a large studio environment in Poland. This was recorded with standard microphone placement ( Decca Tree overall, Stereo spot mics on the violin).

Next we recorded the Toccata as well as an overdubbed take of the Fugue back in my studio, with the solo violin recoded with a mono mic placement to achieve a direct, singular signal to be used to trigger the audio processing of the Moog.

I then recorded many more passes of the Moog solo part to add textures, along with tracks of the processing of selected passages from the solo violin and ensemble to complete the sonic picture.

Though this is not the usual procedure that is undertaken in ‘conventional classical’ recording (which normally would have involved only the second phase and a large amount of patching overdubs or inserts) it is a common technique used for film soundtracks and other contemporary recordings.

Overall I feel that we created a unique soundscape on the recording and I feel honoured to have been given the task of creating this project.

Watch Craig Leon talking about his Bach to Moog project below, and listen to sections of the recording:

Bach to Moog: A Realisation for Electronics and Orchestra is released on 4 May 2015 on Sony Classical.