Julian Haylock examines the technical poise, interpretative focus and musical humility that made the player a violinistic ideal 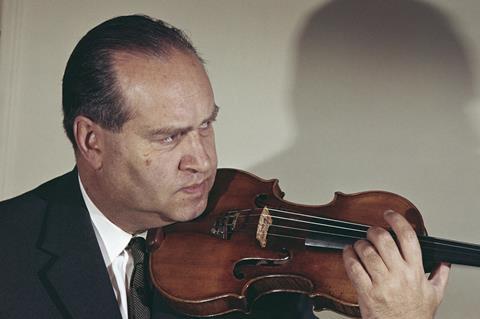 David Oistrakh held all aspects of violin artistry in perfect balance and made even the most challenging of pieces seem effortless. For many the ideal violinist, he combined fingers of steel with a heart of gold.

Oistrakh’s only teacher was Pyotr Stolyarsky (1871–1944), whose other students included Nathan Milstein, Boris Goldstein and Elizaveta Gilels (sister of Emil, and wife of Leonid Kogan). Milstein later claimed that he had learnt ‘nothing’ from Stolyarsky, but Oistrakh remembered his 13 years under his guidance with respect and affection. He explained: ‘From the very beginning he instilled in us the need for perseverance and showed us how to enjoy the pleasures of the creative side of music.

His incredible enthusiasm was contagious and we were all affected by it.’ Remarkably, when Oistrakh won the Ysaÿe Competition in 1937, three other Stolyarsky pupils were also prizewinners: Goldstein, Gilels and Mikhail Fichtenholz, whose career was cut tragically short by the Russian state when his wife was denounced as an ‘enemy of the people’ during Stalin’s Great Purge of 1938–9.

Few artists have made the art of playing the violin look so effortless. On occasion, Oistrakh’s unfussy though commanding stage presence and technical ease were such that the listener was left quite unaware of challenges being overcome. This sense of impregnability extended to his interpretative style, which while never actually cool, tended to be shorn of all excess and indulgence. When listening to an Oistrakh performance – most especially his studio recordings – it is the accumulation of the whole that tends to leave the most profound impression, rather than the emotional resonance of individual moments.

Yet Oistrakh was no slave to his own playing proclivities. In Mozart and Beethoven he was eminently straightforward, inflecting his bowing with myriad subtleties of angle, pressure and placement between fingerboard and bridge. In the music of Prokofiev and Shostakovich, he adapted his essentially cushioned style of bowing to produce a slightly more strident, less sensuously alluring tone. In Romantic repertoire, he was expressively more flexible, most notably in the opening movement of the Tchaikovsky Concerto, whose patchwork-quilt structuring was mirrored in Oistrakh’s keenly responsive emotional patterning.

Oistrakh possessed large, quite fleshy hands, which helped prevent any roughness to his tone. They were also unusually flexible, making comfortable the kinds of stretches that for some players are out of bounds. His fingers appeared to caress the fingerboard with the minimum of perceived effort and height, and the liquidity of his position-changes made the potentially hazardous appear graceful. His vibrato tended towards medium–slow, and he deployed it with exquisite subtlety, bucking the prevailing tendency to vibrate all the time. To lend the left arm extra support, Oistrakh used a shoulder pad, which he insisted left the natural resonances of his violin unimpaired.

One of the most enviable of Oistrakh’s many qualities as a player was his supremely relaxed bow hold, which never appeared to stiffen even when playing staccato or marcato. The little finger was raised through most of the stroke, only coming into contact with the stick as the heel approached and departed the violin so as to counterbalance each bow change, a technique that was facilitated by an unusually flexible index finger.

Oistrakh created a large sound of sovereign warmth and intensity. His dynamic range was (typically for players of his generation) not particularly extended at the lower end, and he preferred a cushioned attack as opposed to the Galamianesque ‘kick’ of Rabin, Zukerman and Mintz. His medium–fast, full bow strokes delivered a full-throated sound midway between Milstein’s satin purity and Stern’s galvanising strength.

For many, Oistrakh remains the violinistic ideal. His winning combination of tonal sumptuousness, clear interpretative focus, musical humility and effortless technical poise across a broad repertoire remains unmatched to this day. When Oistrakh played, one felt there was nothing coming between the composer and the listener.

Part of Oistrakh’s appeal was his seeming imperviousness to musical frailty of any kind, although by the 1970s, his sound had thinned a little and his rate of vibrato had become less varied. For some tastes, Oistrakh lacked the electrifying interpretative charisma of Heifetz, Stern and Menuhin.

Ruggiero Ricci once told me: ‘A Stradivari tends to cushion the sound, whereas with a Guarneri you can really whack the bow down. For Heifetz, who had a direct attack, a Stradivari was not so well suited, but I can’t imagine Oistrakh, with his cushioned attack, on anything other than a Stradivari.’ And he was absolutely right.

Oistrakh is known to have played the c.1727 ‘Guilet’ Guarneri ‘del Gesù’, a c.1715–20 Pietro Giacomo Rogeri and a 1629 Amati. But his stock-in-trade violins were a series of ten Stradivaris, mostly owned by the Russian state (three of them also played by Kogan). Most notable among them were a 1671 instrument loaned to Oistrakh by Queen Elisabeth of Belgium, which was stolen from a Russian museum in 1996 but recovered five years later; the 1702 ‘Conte de Fontana’, now owned by the Fondazione Pro Canale in Milan; and the 1705 ‘Marsick’ which after Oistrakh’s death passed on to his son Igor.

As is evidenced by a stunning account of the Wieniawski A minor Étude-Caprice with Igor, David Oistrakh was a phenomenal technician. However, playing music purely for virtuoso gratification held no allure for him – the total extent of his recorded Paganini, for example, is a pair of caprices taped in 1948 and the ‘Moses’ Variations from three years later.

Oistrakh’s is one of the most wide-ranging discographies (official and unofficial) of any violinist, although interestingly the only solo Bach he recorded was the G minor Sonata. Other surprises along the way are three accounts of him conducting Berlioz’s Harold in Italy (with Barshai, Tolpygo and Igor Oistrakh respectively), and a number of comparative rarities by the likes of Benda, Catoire, Godard, Hubay, Kompaneyetz, Levina, Levitin, Meyer, Rakov, Taktakishvily, Townsend, Vainberg, Vladigerov and Zarzycki.

There are at least eight recordings of the Beethoven Violin Concerto by Oistrakh in circulation, some fourteen of the Brahms and twelve of the Tchaikovsky, but of prime importance are those works written for and/or premiered by Oistrakh, including Prokofiev’s two sonatas (he played two movements from no.1 at Prokofiev’s funeral), Shostakovich’s two concertos and Violin Sonata, and the Khachaturian Concerto.

1926 Graduates from the Odessa Conservatoire

1974 Dies of a further heart attack in Amsterdam, aged 66

This article was first published in The Strad's December 2009 issue.