The Finnish composer put all his knowledge as symphonic writer and frustrated violinist into this great, elemental work. First published in The Strad’s January 2008 issue, Leonidas Kavakos’s masterclass explains how to do it justice 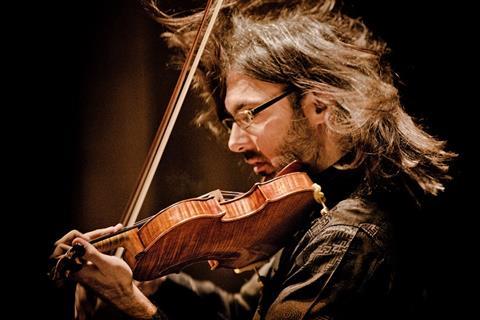 There are many things about this piece that make it special. It is a 20th-century piece, and yet it feels like Beethoven or Brahms. Sibelius was going in a totally different direction from the other great composers of the time, and his concerto has the feeling of being an ancient piece. Sibelius’s aesthetic was to concentrate the best aspects of Romanticism and nationalism, using a Classical mould. Both he and his contemporary Nielsen were pioneers who maintained links with the past while producing music that sounds fresh. So even though the score of the Sibelius looks Classical in terms of structure and form, the result is unique, and its identity penetrates the mind and ears of the listener – it has such power, such concentrated energy.

The piece is also very personal. Sibelius was a violinist himself, and so when he wrote it he used not only his skills as a composer but also his knowledge as a player. He was incredibly aware of the instrument and uses it in a way that no other composer does.

The work was performed in its first version in February 1904, dedicated to Franz von Vecsey, a Hungarian wunderkind; but Sibelius withdrew it, and in 1905 substantially revised it into the piece we know today. In the first version the conflict between Sibelius’s dream of being a virtuoso and his frustration at not succeeding is even clearer than in the final one – we see a much more complicated violin part against a simpler orchestral part. The main ideas and the treatment of the themes are the same in both versions, but unlike the final version, in which everything is in the service of the idea, in the first version all is in the service of violin virtuosity.

In the final version we see the great symphonic composer at work: in the first version everything takes longer and there is a sense of the orchestra observing the soloist, whereas in the second version the orchestra is an almost equal partner to the soloist.

The first movement is the most complicated. The stillness of the opening reflects the calmness of a Finnish lake (see example 1). The first theme is linked to central European folk music: stretching over the bar-lines and using dissonance, for example in the first note. This is like a traditional Greek or Transylvanian dirge, in which a lute plays a slow tremolo, while a clarinet or violin starts with a dissonance. Here the orchestra plays a D minor chord in the distance and the soloist starts with a note that is dissonant to it.

The first phrase has an incredible structure. The tonic (D) is reached twice, and then the phrase of bar 9 is repeated again in bar 11, to get to the dominant (A). This should sound like an improvisation. The quintessence of improvisation is to reach the tonic, and the genius of the instrumentalist is how far they can get away from the tonic before returning to it. It’s like an elastic band that can be stretched a long way, but that always bounces back to its original form. One has to try to realise what Sibelius does with the material, how he places it within bigger sections, and the connections between these. For example, the turn in bar 7 is repeated in bar 14; however, whereas the first time the phrase ends on the D, the second time Sibelius moves off the D and introduces a G sharp, which takes the music off into a completely different direction. One has to look closely at the material in this way, as every detail is important; without these elements the structure would be totally different. Then one has to see the bigger units and be sensitive to every change, so that when one looks at the score to find out how to play the first G, and the G in the third bar of figure 1, it is clear that each has a totally different harmonic background. The latter is in E flat major, and requires a different sound. Harmonies and rhythmic swing are the cornerstones of music. The biggest problem today is that melodies are played without the necessary rhythmic swing. A melody that is without a sense of structure, harmony and rhythm is ill.

There is a big question as to the amount of vibrato one should use. Vibrato must serve the context of the music, and here I’d suggest that the dissonant opening note has more effect without any, or with minimal, vibrato. The continuous motion of the accompaniment serves as a vibrato, and the soloist should restrain themselves in terms of sound until the crescendo in bar 16, when they can start opening it up. Sibelius uses a chorale-like chord progression 16 bars after figure 1 (see example 2), moving from F on the first note of that bar, to the G on the first note of the next, the harmonic A in the same bar and then the B flat in the 18th bar after figure 1. As the violin part moves upwards, the basses move downwards. This motif is repeated 16 bars after figure 8, which is a more perfect version: the first time, the A comes too soon, on the second beat of the bar rather than on the down-beat, as it does after figure 8. So when we come out of this the second time, at figure 9, it’s a huge climax.

The double-dotted figure that appears 13 and 15 bars after figure 1 is linked to the opening phrase, but the dots suggest extra drama, and the notes are marked with forte followed by a decrescendo. Another important element of the work is its polyphony – perhaps more than in any other violin concerto. The cadenza 16 bars before figure 2 (see example 3) is a good example of polyphony at work, although this aspect is often ignored. When one has to play so many notes, it’s important not to get lost. Practise the notes as triple-stops to hear the harmonies and understand the point of the semiquavers (_). Here, I would always phrase towards the higher note. Let the important notes shine, even pointing them out by adding accents. The music is not just about fast notes and sounding virtuosic. In general, all the virtuosic elements serve the musical ideas: the piece will sound empty if this isn’t taken into consideration.

The first movement is complex, sometimes making it difficult for the soloist and the orchestra to gel – for example in the second theme, the Largamente after figure 3 (see example 4). This is an expressive moment, but the orchestral counter-rhythm limits the amount of freedom that the player can adopt.

The music from figure 6 is difficult technically – not so much the passage downwards in the first three bars, but the arpeggios. They shouldn’t be too slow or take too long, because the harmony stays the same, with extensions on each run (similar to Paganini’s Caprice no.5); and the return of the original theme in the seventh bar of figure 6 is important and shouldn’t be delayed.

Embarking on the technique required in this fast passage is not made any easier by the fact that it follows the Largamente, with its slow notes, big melodies and double-stops. There, one also needs to apply a certain amount of weight to make the D and G strings sound, which makes it even harder for the player later to switch to fast fingerwork. Sometimes such passages are perfectly playable on their own but are difficult in context. One must be both mentally and physically aware of such juxtapositions of music requiring the application of different playing techniques – everything comes from the mind, and if the mind gives the correct order, the hand doesn’t get confused. But one shouldn’t use this piece to learn technique: one can’t learn Greek by reading Aristotle, after all.

The second movement is as close to Wagner as violin music gets. There should be no sense of time here. Adagio di molto is a hard tempo to play, and it is important to hold the bow firmly and produce a healthy and big enough sound against the accompanying brass section. It’s a long melody – 20 bars – and it’s difficult to build a structure for it and to sing it right to the end. There is a feeling of the eternal here, something ancient. Sibelius has chosen a low register for this, as if it’s the expression of a human being praying to someone who is on a higher level – a device that Bach used in his religious works. 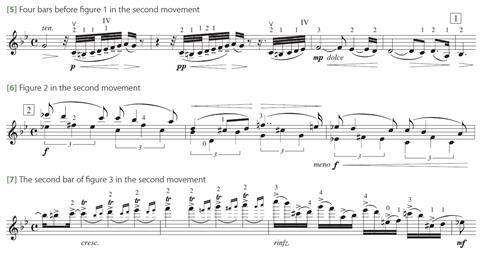 The phrase four bars before figure 1 (see example 5) is a question: it is always written on the second, third or fourth beat, never on the down-beat. The middle section of the second movement, from figure 2, involves an incredible change of atmosphere. The accompaniment is syncopated, in the Hungarian folk music idiom. The melody has a rhythmic swing, and the syncopations create an emotion that leads to something new. What was calm and prayer-like becomes more down to earth, and musically there is much more complexity, which is the genius of Sibelius.

The double-stops at figure 2 (see example 6) are an example of Sibelius’s polyphony – the lower voice is a triplet figure, of which the second note is the most expressive each time (usually it is the first). This builds up to figure 3, where an idea from the opening is turned into a chorale in the second bar of figure 3 (see example 7), which leads to a climax point four bars after figure 3. Here, the first note of each group of semiquavers is dissonant, whereas the second notes of the groups make up the B flat major chord (this motif is connected to the last four bars of the whole concerto). The next bars are full of dissonant and expressive 7ths, and the violin then takes a secondary role to the orchestra with its octaves. This builds to an even bigger climax at the fourth bar of figure 4, which finally reaches B flat. For me the movement ends four bars before the final bar-line: after that, the notes are a trip to heaven.

The opening of the third movement, which is incredibly complex rhythmically, is based on the dactyl rhythm – a long note followed by two short ones. From the first solo entrance the violin is given all the attention, with the orchestra staying in the background and the soloist asked to present a show of extreme virtuosity. At the second entrance the music is gypsy-like. The dance rhythm of the semiquaver followed by a dotted quaver (__) is a particularly Hungarian idiom. So, for example, ten bars after figure 3 one should give an emphasis on the down-beat. There is a tendency to go towards the higher note, but this is wrong – Sibelius even marks ‘forte’ on every beat.

Later in the movement, from figure 10 to figure 12, I try to build the emotional tension by ‘pushing’ the tempo, with a slight accelerando into figure 12, where the violin plays a series of expressive intervals in octaves. This is clearly the climax point of the movement, and although these are difficult intervals to play, jumping from one register to another and accompanied by a big orchestral scoring, it is this very difficulty that creates the emotional charge. In the end, Sibelius allows the soloist to triumph by writing a relatively easy arpeggio over three strong orchestral chords and reaching up to the top D. This was the only time that Sibelius involved himself in writing in concerto form, and with this piece his vision of the virtuoso is fully realised.