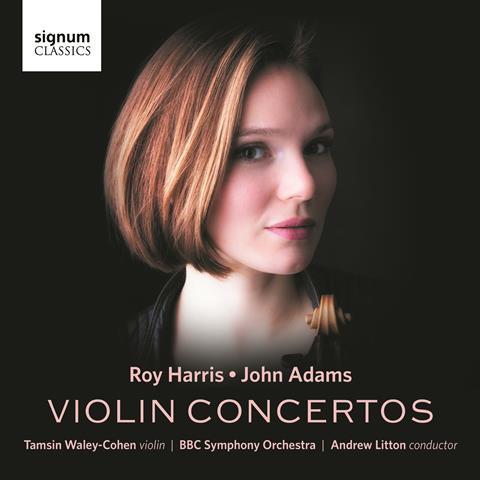 With this release Tamsin Waley-Cohen adds to an already diverse discography and further shows the range of her artistry. She brings luxurious tone and total conviction to both concertos, and receives committed support from the BBC Symphony Orchestra under Andrew Litton. The engineering is clear and crisp, too.

This bodes well for the confident opening gesture of Roy Harris’s 1949 work, in which the violin tends to serve up thoughtful lyricism against the orchestra’s brassier contributions. Cast in four sections, it’s episodic – mercurial or meandering, depending on your point of view – and shifts quickly between Copland-like vistas, snippets of dance and American folk influence. But Harris keeps the momentum up so that the ideas rarely overstay their welcome. Waley-Cohen and Litton play their roles, too: there isn’t one bar they don’t seem fully to believe in.

Adams’s 1993 work is a different matter, presenting some continuity where Harris favours change. Waley-Cohen is tireless in the disquieting, arguably over-long first movement, in which the violin rhapsodises constantly against a slowly churning accompaniment. There’s just the right sense of dazedness in the eerie Chaconne and the restless variety of the ‘Toccare’ finale (listen out for, among other unexpected instruments, the synthesisers). This is engaging music, engagingly performed.