Aaron Rosand on finding the perfect set of strings

Finding the best strings for your instrument can take years of trial and error. The American violinist reflects on his ongoing journey to discover the perfect set 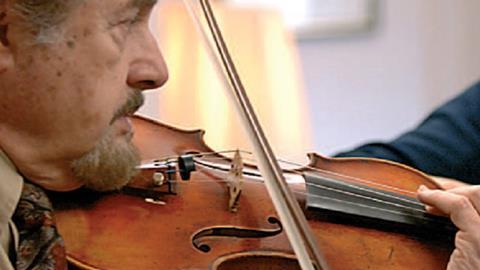 I clearly remember an incident from when I was around twelve years old. I performed in a recital at the Chicago Musical College (now the Chicago College of Performing Arts) where I was studying with the remarkable teacher, and student of Ysaÿe, Leon Sametini. At the end of the recital, the mother of a girl also studying with him asked, ‘Why doesn’t my daughter sound like Aaron?’ Sametini whimsically responded, ‘He uses different strings!’ To which the irate mother replied, ‘So, please, professor, why don’t you instruct my daughter to buy the same ones?’

At around the same time I was actually instrumental – albeit inadvertently – in developing the steel string. Frank Sindelar, a very fine violin maker whose shop was within walking distance of my home on the west side of Chicago, took a personal interest in me after my debut, aged ten, with the Chicago Symphony, and subsequent local appearances. He loaned me a lovely small Gagliano violin, and with this instrument I became involved in regular string experiments.

I was selected to be the guinea pig for some new steel strings (in all gauges) produced by the forerunner of the Super-Sensitive Musical Strings Company. I soon learnt how string thickness affects the velocity of response and the quality of sound. The string’s manufacturer was a steelworker and amateur violinist, and he took my youthful advice to make them thinner for a quicker reaction. The strings were very durable and I used them throughout my high school years.

When I began studying at the Curtis Institute of Music in Philadelphia with Efrem Zimbalist Sr, the philanthropist Max Adler of Chicago loaned me a beautiful Giuseppe ‘filius Andreae’ Guarneri violin. It had aluminium and silver wound gut strings for the G and D, a Thomastik A and a steel E. I always found the A string problematic. It was too glassy compared with the gut D and G strings, it required more pressure and, at times, it would squeak. I began to realise that a softer A string was more desirable and would better balance the quartet of sounds, where the G string is the baritone, the D the alto, the A the coloratura or colouring, and the E string the soprano. The theory is especially true in relation to Bach fugues, works that I see as string quartets.

Zimbalist encouraged me to try a new gut-core A string with a nylon winding. I was very happy with it, but sadly it was discontinued after two years, and removed from the market. I then switched to an unwound gut A – something I use to this day. Although I have experimented with strings throughout my career, when performing or touring I have always played on a Pirastro Wondertone E, a gut A string and Pirastro Eudoxa D and G strings.

When choosing strings you need to take into consideration the type of instrument you are playing. I acquired the great ‘Kochánski’ Guarneri ‘del Gesù’ in 1957. Gut strings were prevalent in that period and I experimented with various thicknesses on all strings. I concluded that the thinnest gauge responded best for the G, D, and A strings, but that a thicker gauge gave the E string a more brilliant sound.

In fact, it wasn’t so long ago that all the great violinists used only gut strings. Heifetz played on open gut A and D strings. His theory was that the E and G became more powerful when the middle strings were subdued, and his glorious recordings certainly testify to this.

Milstein, who I knew well, always used gut A strings. He was 90 when I last visited him in London and he asked me to try his favourite Ansaldo Poggi violin. At that time I too owned an instrument by the same maker, from 1928. The gut A string on his violin was of a thicker gauge than I was accustomed to, and when we spoke about it, Milstein insisted that he could never play on anything else. Milstein and I found that our views on the A string coincided. In my view the D and G strings must blend, but the A string cannot be predominant – otherwise it takes away the penetrating brilliance of the E. Milstein agreed, adding that having a gut A put less pressure on the instrument, allowing it to speak more freely.

I cannot recall exactly when synthetic-core strings became more widely adopted, but perhaps their acceptance has fuelled today’s obsession of trying to achieve a bigger sound. There are other reasons for this too, however: newly constructed concert halls with poor acoustics, flamboyant conductors demanding louder playing, violinists leaning towards heavier bows and extending the index finger to apply more pressure (which, by the way, is a faulty concept) and the basic position of holding the violin that has changed with the adoption of the shoulder rest, resulting in the need to extend the right hand and requiring more bow pressure.

Interestingly, synthetic string manufacturers primarily produce medium- and thick-gauge strings, owing to the misconception that a thinner string produces a smaller sound. Synthetic strings need more bow pressure, and, from my experience, wear out the bow hair more quickly. On the positive side, synthetic strings do solve the problem of durability in all climates, and hold their pitch far better than their gut counterparts. I began using them in the 1980s, when I was performing extensively in Asia and other regions with humid climates. I used the thinnest-gauge Dominant strings available, labelled ‘Weich’, and they proved to be a most worthwhile substitute for my Pirastro Eudoxas. They responded better than the other synthetic strings available and required far less bow pressure.

In the 1990s I sensed that the quality of gut strings was not the same as in previous years when comparing the older strings in my collection with the new ones. As a result, I began to use Dominant strings more regularly, with the exception of a gut A string. For this I used a fine 13¾-gauge one by Damian Dlugolecki, a specialist maker whose strings come plain or coated with his formula for keeping the string from fraying, which gives them longer lives.

String selection is a matter of personal preference, and depends not just on the violin being played, but also on one’s technical level, the colours the violinist wishes to produce with the bow and the gauge required. I look for sensitivity under my fingers, something I can only get with the more pliable gut string. It also makes my left-hand gliding technique more expressive. For me, gut strings offer a warmer quality of sound, especially on the A. They also make the E string even more brilliant. Listen to recordings of the great artists of the past and notice the warm and personal sound. It’s quite different from that provided by contemporary artists on synthetic strings.

There are far more varieties of strings available today than ever before. Very good strings are being produced by manufacturers such as Thomastik-Infeld, D’Addario, Super-Sensitive and Pirastro. I recently tried Pirastro’s newly developed ‘Gold’ set. It is remarkable. It provides power and clarity, and a similar experience to playing on gut. In my humble opinion, the finest gut string available is Pirastro’s Passione, which is a constant companion to all my violins. My other personal favourites are the 16¼-gauge Passione G string and the 13¼ D of the same brand, the Pirastro Chorda 14-gauge A and the Pirastro Gold E string.

You should choose strings that produce a beautiful sound for your inner ear. Try testing them by playing piano, not forte, so that you achieve a contrasting tone with power and beauty. Elman was once asked what the secret was of his big tone, and in his inimitable accent, he replied: ‘Vot big tone? The violin is not a trumpet. My secret is that I know how to play pianissimo!’