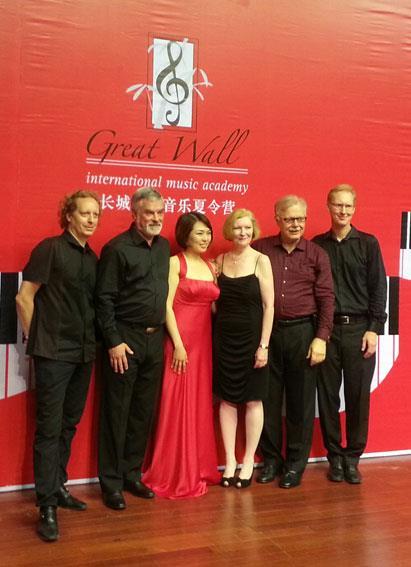 No matter where you start from, China seems very far away, but the lure of the Great Wall International Music Academy (GWIMA) is considerable. Kurt Sassmannshaus, its president, insisted from the start that chamber music be a part of the curriculum and invited the American String Quartet (ASQ) to lead that aspect at the Academy. We have taught and performed there, in Beijing, since the first summer, missing only one of the subsequent eight when schedules could not be shoehorned in. For a detailed look at what goes on at the GWIMA read Nancy Pellegrini’s blog ‘Scaling the Wall in Beijing’ in The Strad online, but for the record we can say that the level of student string playing began high and the awareness of collaborative music making has risen proportionately.

Our faculty concert opened with Brahms, the String Quintet no.1 in F major. When Kurt, ASQ violinist Laurie Carney and I were students at Juilliard a violinist's training included the viola, so Kurt, himself a violinist, bravely dusted off his viola for the concert. In the case of the F major Quintet, however, even those of us playing our first instruments had to work hard. Dare one say that Herr Doktor Brahms was not quite as fluent here as in the Quintet no.2 in G major? Wonderful music, of course; perhaps it is just that we play the G major so much more often, not least because it comes together more easily, a virtue not to be overlooked when rocketing between festivals.

But for labour intensity this summer’s prize went to the Korngold Piano Quintet, a hyper-Romantic essay chock-full of ripe expression and German instructions. For this we will long be indebted to the wonderful pianist Haeri Suh, who learnt the monumental piano part at our request and patiently guided all but one of us through the rehearsals. (Laurie had played the piece at the Aspen Music Festival some years before). We were delighted and relieved that both performances went well despite record high temperatures, and our students got to see their professors jump through some unfamiliar hoops.

The heat in Beijing is no joke and the air quality regularly makes headlines. Hotels and concert halls routinely cool and sometimes filter it, but in a way you don’t truly experience the city until you step outside. The temperature, humidity and pollution add up to a physical presence, like the falling piano in a cartoon. Walk by a tree full of cicadas rasping their unvarying serenade and one feels that jetlag has passed into hallucination. The Chinese food there is very good, though.

The night before we left we performed at The Egg, as Beijing’s National Centre for the Performing Arts is informally known. For this we chose a late Haydn quartet and Shostakovich’s String Quartet no.3, the idea being to provide our students with examples of the stylistic diversity we had been talking about in lessons. For the finale we were joined by another dear friend since our Juilliard days, pianist Rohan de Silva, whose approach to the Dvo?ák Piano Quintet in A major was a balm to the spirit and a firecracker for the audience.