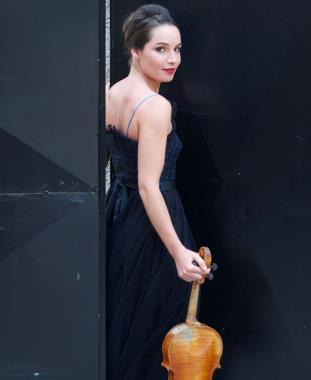 French violist Lise Berthaud and the Danish String Quartet have been chosen to join the BBC Radio 3 New Generation Artists scheme for 2013–15. The artist development programme, which was launched in 1999, gives emerging international performers the opportunity to give concerts in London and around the UK, as well as make recordings for Radio 3 and with the BBC orchestras.

Berthaud (pictured), who was born in 1982, studied with Pierre-Henry Xuereb and Gérard Caussé at the Conservatoire National Supérieur de Paris. She was a prizewinner at the European Young Instrumentalists Competition in 2000 and won the Hindemith Prize at the Geneva International Competition in 2005.

The Danish String Quartet, comprising three Danes and a Norwegian cellist, made its debut in 2002. The quartet has been mentored by Tim Frederiksen and has received coaching from the Tokyo and Emerson quartets, Paul Katz and Levon Chilingirian, among others. In 2009 the group won first prize at the London International String Quartet Competition, as well as four other prizes in the same contest. The quartet was recently appointed to the Chamber Music Society of Lincoln Center's CMS Two programme.

The new members of the New Generation Artists scheme join other string players who have already completed a year of their two-year programme: US violinist Elena Arioste, German cellist Leonard Elschenbroich, and the Apollon Musagète Quartet from Poland.