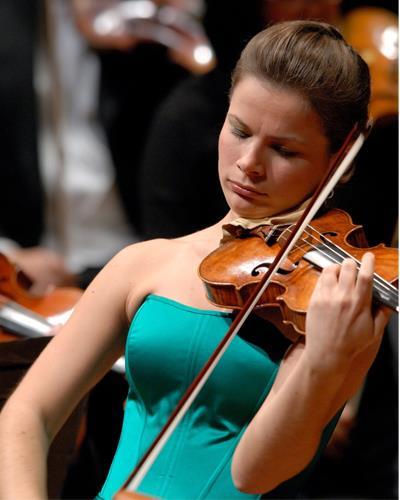 Two violinists and a string quartet are among the five recipients of the 2013 Avery Fisher Career Grants. The awards, administered by the Avery Fisher Artist Program, are worth $25,000 apiece and are designed to help young musicians build careers.

Bulgarian-born violinist Bella Hristova (pictured) has won first prize at the 2007 Michael Hill Violin Competition in New Zealand, and came first in the 2009 Young Concert Artists international auditions two years later. This season she is performing contemporary music programmes in the Far East at the Shanghai International Music Festival and at Seoul National University. Hristova plays on a 1655 violin made by Nicolo? Amati.

Israeli violinist Itamar Zorman has received first prizes at the 2010 Freiburg International Violin Competition and the Juilliard Alban Berg Concerto Competition. In 2011 he shared second prize at the International Tchaikovsky Competition with Sergey Dogadin; no first prize was awarded. He is currently studying with Christian Tetzlaff at the Kronberg Academy, and plays on a 1745 Pietro Guarneri violin.

Formed in 2005, the Escher Quartet comprises violinists Adam Barnett-Hart and Aaron Boyd, viola player Pierre Lapointe and cellist Dane Johansen. The New York-based group has recently completed its third season as resident ensemble of Chamber Music Society of Lincoln Center’s ‘CMS Two’ programme. In the UK, the quartet took part in the BBC’s three-year New Generation Artists scheme from 2010–12. This season, the foursome has been recording the complete Zemlinsky quartets for Naxos.

Two other instrumentalists have also received grants from the organisation this year. Both are pianists: Kuok-Wai Lio, from China, and Andrew Tyson from the US.