The UK period musician is the first female to receive the award, worth £10,000 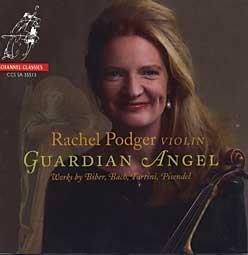 Violinist Rachel Podger has been awarded the 2015 Royal Academy of Music Bach Prize – the first woman to receive the honour. Supported by the Kohn Foundation, the £10,000 prize is given annually by the London institution to an individual ‘who has made an outstanding contribution to the performance and/or scholarly study of the music of Johann Sebastian Bach’.

Podger holds the Academy’s Micaela Comberti Chair of Baroque Violin and has performed regularly at the school as part of the RAM/Kohn Foundation's Bach Cantata series. 2015 is also the tenth anniversary of her Brecon Baroque Festival, which this year centres around JS Bach’s life and work in Leipzig. A performance of the St John Passion will open the festival on Friday 23 October in Brecon Cathedral.

Podger will be presented with the Bach Prize at a recital in the Academy’s Duke’s Hall on 7 October 2015. Previous winners include András Schiff, Sir John Eliot Gardiner, Masaaki Suzuki, Murray Perahia and Ton Koopman.