Violinist Joshua Bell on the art of conducting

In 2011 the Grammy Award-winning artist became music director of the Academy of St Martin in the Fields, where he conducts from the concertmaster’s chair 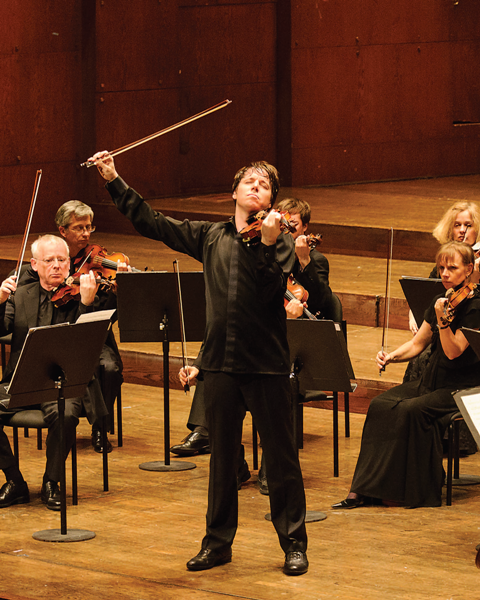 When I’m preparing a symphonic work, such as Mozart’s Symphony no.40, I always start by practising phrases in the first violin part on my own, as if I’m playing a solo line. I’ll put whatever nuances or rubato seem appropriate to me, and then, when I’m with the orchestra, I’ll play for them the way I’ve imagined it and then we see how close we can come to that. The general philosophy is that you have to tone all that down when you’re playing with orchestra, since there will be 20 violins playing at once, but I’ve been pleasantly surprised to find how much room for character and phrasing there is. It’s fun to see how far one can experiment and take risks that way.

Good conductors know immediately when things are going wrong and slipping away from them, and they’ll be able to nip a problem in the bud. Sometimes a conductor won’t notice until it’s too late, and then they’ll over-compensate to get things back on track. It feels like a driver skidding on ice and then over-steering, which brings you into a spin. I’ve often noticed this as a soloist; a good conductor will be able to bring the orchestra back, in a way that ensures that no one panics and there are no inorganic rhythm changes.

I’ve always treated violin concertos the same way as chamber music, listening to the orchestra throughout and picking up on what they’re doing. I’ve played some of them so many times, such as the Brahms, that I feel I could email the conductor a memo detailing all the points that have a 90 per cent chance of going wrong, and what to do to correct them – if that happened, maybe we wouldn’t need a rehearsal at all!

It’s true that 90 per cent of the conductor’s job happens before you move your arms at all – it all comes from having a really strong idea of what you want and thinking it out. I once thought that that level of planning would take away some of the spontaneity, but in fact it just creates a better understanding of the music.

If a string player asked me for advice about becoming a conductor, I’d suggest that the best way is to start small, with the Tchaikovsky Serenade and chamber works with lots of strings. I’ve never conducted a Mahler symphony, or a violin concerto, and I think it’s important to start small and work my way up. And I’ve learned a great deal from talking to orchestra members: what they like about conductors, what they don’t like, most effective rehearsal techniques and so on. There are very few conductors who can strike the right balance between being authoritative and not being condescending or unpleasant: I’ve witnessed orchestras not respecting their conductors because they’re too nice. It’s almost as if you can’t win!

The Strad's March 2015 issue, out now, investigates the increasing number of string players who are expanding their horizons - and musical skills - by turning to conducting. Subscribe to The Strad or download our digital edition as part of a 30-day free trial. To purchase single issues click here.