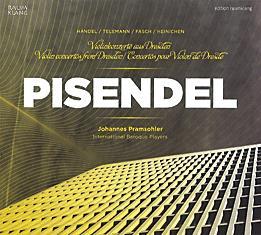 This debut disc for both violinist Johannes Pramsohler and the period-instrument International Baroque Players explores concertos by 17th-century German composers associated with the Dresden court. Pramsohler’s assured technique and musicianship are impressive in music both fast and slow. His solo passagework is particularly athletic and uplifting in the second and final movements of Heinichen’s A minor Violin Concerto and the first and third movements of Pisendel’s Violin Concerto in G major.

The tender lyricism of his cantabile playing is also pleasing, not least in the Affettuoso of Heinichen’s work, which is virtually a sonata slow movement for violin and continuo. The same quality marsk the central Andante of J.F. Fasch’s Concerto in D major, where he shares the spotlight with the rich sonorities of some excellent wind soloists, backed by a sensitive continuo group.

Orchestra and soloist also complement each other well in Telemann’s B flat major concerto, performing its four contrasting movements with taste and insight. And while Pramsohler has only a rare moment of prominence in the Adagio of Pisendel’s arrangement of Handel’s Sonata in F major, the work as a whole is dispatched with characteristic flair and energy, especially its finale and the glorious denouement of its fugato second movement. The recorded sound is exemplary.