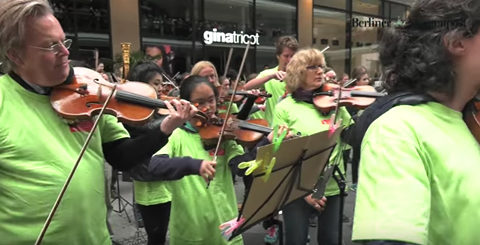 More than 900 amateur musicians descended on the ‘Mall of Berlin’ shopping centre in the German capital’s Leipziger Platz on Monday 16 May, where they were joined by 50 members of the Deutsches Symphonie-Orchester Berlin for a surprise concert. Conducted by Kent Nagano, the musical flashmob performed works by Verdi, Wagner and Bizet. Although the mall was closed for Whit Monday, a public holiday in Germany, spectators were allowed into the upper floors to watch the spectacle below.