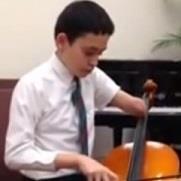 The young performer holds the cello between his knees, using his arm in place of fingers to change pitch and to produce vibrato.

The Strad's December 2013 issue featured an article on teaching limb-different children - download through The Strad App.

Julienne had an honor recital on Saturday and this boy, Michael Spencer, also performed at the recital with his cello. What a great example of turning limitations into assets!