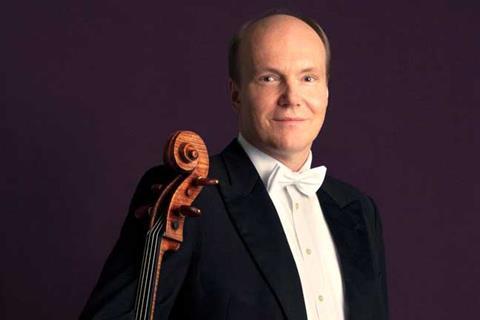 The Norwegian cellist Truls Mørk grew up in Bergen in a musical family, his father a cellist and his mother a pianist. At the age of 17 he began studying with Frans Helmerson and would later receive tuition from the Austrian cellist Heinrich Schiff and Natalia Shakhovskaya in Moscow. In 1982 he became the first Scandinavian to be a finalist and prize winner in the Moscow Tchaikovsky Competition. He was later a prizer winner at the Cassado Cello Competition in Florence in 1983 and at the Naumberg Competition in New York in 1986. Mørk quickly became known for his romantic and emotional approach and has emphasised his wider, more structural interpretation of the Bach Cello Suites as a particular hallmark of his playing. His international touring career began in 1989 and he has since worked with the major orchestras of Europe, including the London Symphony and the Academy of St. Martin in the Fields. Mørk plays a 1723 Domenico Montagnana cello.