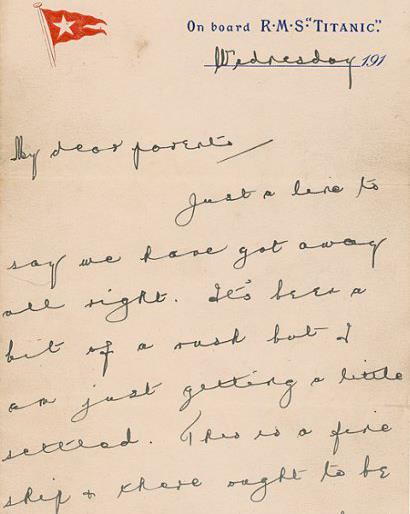 A letter written by Titanic violinist and bandleader Wallace Hartley has been sold for £93,000. Hartley wrote the letter on board the Titanic just days before the liner's maiden voyage ended in tragedy in the North Atlantic on 14 April 1912.

The letter, addressed to Hartley's parents, had been expected to sell for between £50,000 and £60,000 in Henry Aldridge & Son's 20 April auction of Titanic memorabilia. According to a statement from the auctioneers, a collector from the US paid over £93,000 for the letter.

The letter reads: 'Just a line to say we have got away all right. It's been a bit of a rush but I am just getting a little settled. This is a fine ship & there ought to be plenty of money on her. I've missed coming home very much & it would have been nice to have seen you all if only for an hour or two, but I couldn't manage it. We have a fine band & the boys seem very nice. I have had to buy some linen & I sent my washing home today by post. I shall probably arrive home on the Sunday morning. We are due here on the Saturday. I'm glad mother's foot is better.'