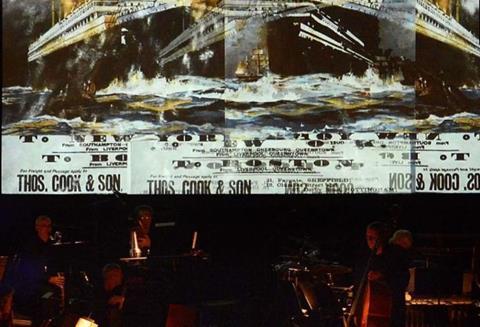 ‘An extraordinary act of self-sacrifice’: Gavin Bryars on the inspiration behind The Sinking of the Titanic

Composer and double bassist Gavin Bryars will mark half a century since he began writing The Sinking of the Titanic, ‘for indeterminate ensemble, possibly including string ensemble’, with a performance of the work at Kings Place in London on Sunday 8 December.

Bryars will lead his ensemble from the double bass, and the performance will take place in front of projected archival film footage curated by artists Bill Morrison and Laurie Olinder, with vinyl-based samples by turntablist Philip Jeck.

From the archive: a tribute to the band of the Titanic

The Sinking of the Titanic first materialised in 1969 in the form of sketches and text. Bryars wrote a performance version in 1972 and the piece was premiered at Queen Elizabeth Hall in London that year.

‘The initial starting point for Titanic was the reported fact of the band playing the hymn Autumn in the final minutes of the ship’s sinking, in an extraordinary act of self-sacrifice, as an attempt to keep people’s spirits lifted,’ Bryars wrote on Twitter.

RMS Titanic’s junior radio operator, Harold Bride, reported that the band never stopped playing. Speaking to the New York Times in April 1912, in the aftermath of the catastrophe (Titanic struck an iceberg on 14 April and sank on 15 April), he said: ‘…the band was still playing… they were playing Autumn then. I swam with all my might. I suppose I was 150 feet away when the Titanic on her nose began to settle - slowly… the way the band kept playing was a noble thing… and the last I saw of the band, when I was floating out in the sea with my lifebelt on, it was still on deck playing Autumn. How they ever did it I cannot imagine.’