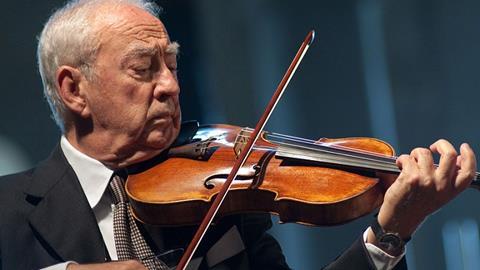 In The Strad's September 2013 issue the great violist and pedagogue Bruno Giuranna spoke about his approach to teaching. In six pages of the magazine there wasn't enough space to include all his insights, so here are some further quotes:

In my teaching I try to have an ideal player in mind. I don’t want each student to look just like that ideal player, because they are different constitutionally, but it’s always clear to me which little things should be corrected in order to improve. It’s difficult to say, ‘This is the best way.’ Teaching depends on what you have in front of you.

I doubt that a young student can really judge whether a teacher is the right one. The student might feel that teachers are good because they are kind, but that’s not always the case. There are moments when a student has to face the problem of discipline – training that is a problem. Masterclasses are good because you get a sense of how a teacher teaches, and whether that’s appropriate for you.

I strongly suggest that students don’t listen to other people’s performances before they work on a new piece, because hearing someone else is like receiving an imprint from them. If you already know the piece, you have the possibility of making your own mind up, but if it’s a piece you’ve never heard before, it’s going to be something you imitate.

I suggest that each student finds the way that is best for them of studying a new piece. There are many methods. You could sightread through, under tempo. You could forget your instrument and just learn the music and start to figure out the fingering and bow distribution mentally, learning the piece without the instrument. Or you can start playing the notes without bowings, but with rhythm, whatever the original bowings are, just to understand the left hand, and then trying to understand what the bow division could be. Each of these ways should be experienced by the students in order for them to start thinking about what is best for them.

My teacher, Remy Principe, always considered that three or four notes on the same string should be practised by themselves in threes, in order to have those notes like a fingerprint, and then to go to another one – that was his system for the left hand. He was a strong believer in Š evÄík’s op.2 for the bow and he had a clever way of practising that. This involved using a shorter theme, and one variation in each chapter. The chapter has 12 variations with the whole bow, 25 variations with half-bows and 13 variations with staccato. If you do that, you’ll never arrive at sautillé. So you practise only once with the full bow, once with the half-bow, once legato and so on, using the first theme. This way, you practise all the styles. Otherwise you would spend three weeks on whole bows and throw away the book.

The viola edition of Š evÄík is not good, because the chapter divisions are not as clear as for the violin. But there’s nothing wrong with a student transcribing violin studies into a different clef – you can do it in Finale with one click.

Playing without a shoulder rest

I feel strongly about not playing with a shoulder rest for myself, but there are many more cases where I have suggested students use a shoulder rest than take it off. I play without, so very often the student will want to do it like that, too. I do it because the sound is better, and there is no doubt about that. The shoulder rest stops the vibration of the instrument. Even if it doesn’t touch the centre of the instrument, it stops the vibration of the length. If I play something with a shoulder rest and then take it off, you can hear that the sound is freer and bigger. Students can play without a shoulder rest, but they have to hold the viola differently, with the viola leaning on the collarbone. If in order to play without a rest we have to lift the shoulder, that shoulder is going to bring problems. I often look at my students from the back, to see how straight they are. That is often not done, and sometimes a perversion of the left thumb happens because teachers don’t look from the other side enough.

Shifting without a shoulder rest is a little more complicated, but it can be done. Primrose made a point of that. He writes that to shift up is very easy, but to shift down there is this feeling of losing the viola. Even the consideration that no one ever drops the viola on the floor is of no help.

One of the things I look for is if there’s too much of a mark on their neck, which often means there’s too much pressure of the head. I often say that I don’t want to see that: it’s not necessary.

One of the golden rules of shifting is that the finger that played last goes to the next position on the same string. It is very simple to make an exercise from this: 1–1; 2–2; 3–3; 4–4; then back.

Interpretation of a piece is doing something that is not written in the music. Written scores don’t show the music – they hide it. When there was an aural tradition, it was taught by imitation: someone played and you imitated. You didn’t just receive the notes, but also a strong image of how to play this tune. This 'how' does not exist in the writing system. So the notes in front of us are the raw material from which we should be scholars.

One must ask, 'How can one make a shape out of this?' I suggest playing exactly what is written without any expression, trying to make an effort to be amusical. And try to develop the sense of criticism. ‘OK, this is written like that in order to make it more beautiful, or make more sense.’ Interpretation starts from phrasing. In language we do this all the time – we express what we want to say; in music we have to discover it. Four notes are seldom four even notes.

Read: Viola players must decide whether they want a bright or dark sound, say Bruno Giuranna