The Ground Beneath Our Feet. Reich: Duet. Bach: Concerto in C minor for Violin and Oboe BWV1060R. Stravinsky: Dumbarton Oaks. Jacobsen/Aghael: Concerto for Santur, Violin and Orchestra. The Knights: . 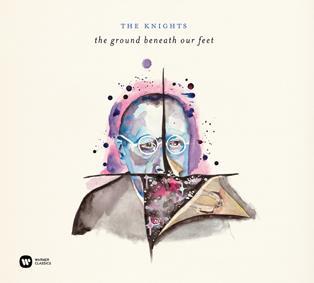 The Knights are an ‘orchestral collective’ based in New York and led by brothers Colin (violin) and Eric (cello) Jacobsen, best known as members of the Brooklyn Rider string quartet. Formed as a vehicle to explore new repertoire and concert formats, the ensemble has chosen a programme inspired by the concerto grosso form for its new live recording.

The album opens with a fairly straightforward mix of Baroque and 20th-century repertoire (Reich’s Duet for two violins and strings, Bach’s Concerto for violin and oboe in C minor and Stravinsky’s Dumbarton Oaks), and then veers off into uncharted territory. At almost half

an hour, the Concerto for santur, violin and orchestra by Colin Jacobsen and Siamak Aghaei is a significant piece of work. With roots in the workshops of Yo-Yo Ma’s Silk Road Ensemble, this glittering, propulsive piece of East–West fusion blends solo sections for santur (Persian zither) and high, driving passagework for violin with shifting textures of strings, wind and percussion.

However, the title piece, …the ground beneath our feet, is the most experimental work here: a group composition built on a chaconne,

that works like a theme and variations with styles flowing from neo-classical and jazz (the soulful opening bass solo is a highlight) to Irish jigs and popular song. It is a beguiling end to a cleverly compiled and dynamically performed programme. Recorded in Dumbarton Oaks Library, Washington DC (a happy link to the Stravinsky), the warmly resonant live recording is flexible enough to present the varied music here, despite occasional lost details.