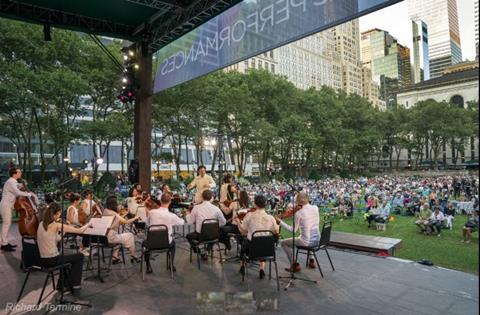 It had been decades since I’d heard Mozart’s Eine kleine Nachtmusik played live. The Knights chose to go conductor-free, and the 13 musicians approached the score with zest and clarity. Listeners used to hearing larger ensembles may have been slightly startled to hear the composer’s giddy contrapuntal lines etched so cleanly. As twilight settled over Bryant Park, the ensemble’s exuberance in the finale seemed ideally matched with the locale.

London-born composer Anna Clyne was on hand to introduce Prince of Clouds (2012), for string ensemble and two violins – in this case, Alex Gonzalez and Colin Jacobsen – with Eric (Colin’s brother) again at the podium. After carefully retuning, the two violinists opened with slow, intertwining lines, followed by the rest of the ensemble in sober, rising intensity. As the work progressed, so did the nervous energy, with battalions of expertly punched snap pizzicatos. The contrasts between legato lines and gruff rhythms increased, until the ending appeared in a peaceful haze.