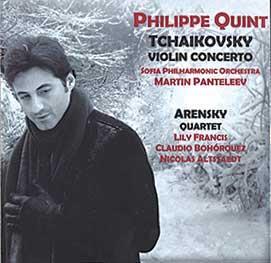 Tchaikovsky’s Violin Concerto thrives on an espressivo intensity full of fast vibrato and generous portamento – distinctive qualities that Philippe Quint indulges to the full here. His unblemished, relatively lightweight sound also proves ideal in gently articulating the work’s dazzling pyrotechnics without a hint of forced tone and imparts an angelic purity to the heart-rending strains of the slow movement. Finest of all is the Cossack-dance finale, throughout which the music’s fizzing staccato semiquavers possess a sparkling effervescence that keeps everything on its toes.

For an adrenaline-charged surge, delivered at near-continuous white heat, Isaac Stern’s 1958 classic recording with the Philadelphia Orchestra in full cry (CBS/Sony) remains a must-hear, yet Quint’s more considered approach is also highly persuasive, and is enhanced by his inclusion of a second version of the finale in the edition by Leopold Auer.

The inventive coupling (coincidentally another op.35) is the elegiac String Quartet no.2 by Anton Arensky, composed in memory of Tchaikovsky and scored unusually for violin, viola and two cellos – the central movement is a set of variations on a Tchaikovsky song that later found fame in an arrangement for string orchestra. It receives an impassioned, virtuoso performance here of scintillating élan, glowingly phrased, richly coloured and boldly engineered in the Russian style.