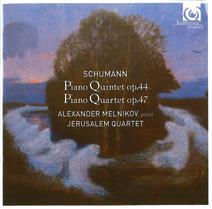 It is pleasing to hear the pairing of Schumann’s piano quartet and quintet on this disc by Moscow-trained pianist Alexander Melnikov and the Jerusalem Quartet, the latter a winner of numerous awards including the Diapason d’Or in 2008. Both works are played with great precision and sensitivity in Harmonia Mundi’s clear, if slightly over-reverberant recording.

As a consequence, Schumann’s delicate textures are rendered lightly in a bright and youthful sound world, which works well in places such as the scherzo second movement of the Quartet and more generally in the more optimistic Quintet, where the finale has a great sense of élan.

At times, however, the darker hues of the Quartet in particular can sound a little lacking. The development section of that work’s first movement, with its brooding chromaticism, needs much more of a sense of crisis than the treble-dominated and sugar-coated delivery it gets here, while the third movement’s ravishingly beautiful melody could be rather more indulgent. I found myself craving a darker, earthier sonority and a rather bleaker vision of Schumann’s Romanticism.

This said, this is clearly a quality disc, and the precision of its execution is very much in its favour.