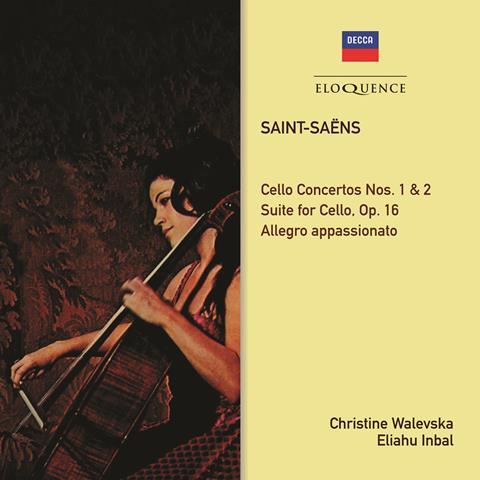 Born in Los Angeles in 1948, Christine Walevska (or Walewska) enjoyed a brief vogue in the 1970s when she recorded for Philips. She later withdrew to South America for a spell, falling out of the spotlight. This Saint-Saëns compendium, released in 1974, did not make it to British shores.

She is straight out of the blocks in the A minor Concerto with a brisk tempo, although she relaxes with warmth into the second theme. In the central minuet and the lyrical episodes of the finale, she plays with a lovely tone across the range; and she displays exhilarating virtuosity in faster passages.

Written for the Dutch cellist Joseph Hollmann, the D minor Concerto is a neglected work – this was probably its first recording. It makes a wan impression after the A minor, although Walevska does her best with fine double-stopping and playing that runs the gamut from assertive to tender. The second movement is too fast for ‘non troppo’, leaving her nowhere to go in the Molto allegro.

The Suite is charming, an agreeable Prélude and four genre pieces: a wistful Sérénade, jaunty Gavotte with drones, dreamy Romance and sprightly, virtuosic Tarantelle. The Allegro appassionato is well performed and there is excellent orchestral playing on this well-recorded disc. The annotator drops several classic clangers.