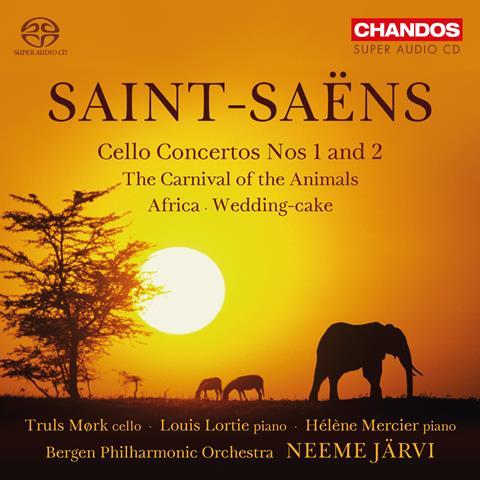 Berlioz once accused Saint-Saëns of lacking inexperience. I think it’s fairer to say that he was patchy in terms of invention. Sometimes, as in his First Cello Concerto and Carnival of the Animals, he is inspired and the ideas sparkle. And sometimes he is… well, not inspired. Neither of the two works for piano and orchestra on this superbly recorded disc reveals Saint-Saëns at his best, although Louis Lortie gives sterling performances.

Unfortunately the Second Cello Concerto is also firmly in this camp. Of course, all cellists hope that perhaps it might be as good as the First Concerto, and play it with caressing finesse and brilliance. Truls Mørk certainly provides a resoundingly splendid performance with the patched-together derivative sequences that could grace any 19th-century volume of dull studies. But it’s not enough to rescue the music from being a well-orchestrated yet disappointingly mundane composition.

Not so the First Concerto, which is captivating and brilliant. Mørk gives a beautifully judged and eloquent classical reading with the technical passages clearly delivered, and the orchestral partnership under Järvi is fantastic in terms of balance, nuance and ensemble. Carnival of the Animals – teeming with wit and satire – is projected with great panache, with ‘The Swan’ gliding as elegantly as ever in Mørk’s hands.