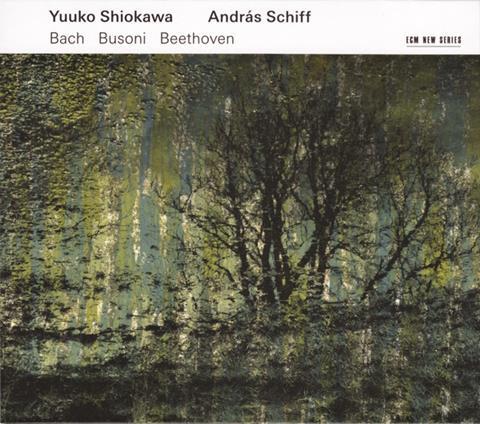 This husband-and-wife duo presents a thoughtfully determined and subtly interconnected programme. However, anyone expecting a well-matched musical partnership will be disappointed, as these players seem poles apart in technical proficiency and musicianship. András Schiff, who originally established himself as an interpreter of Bach, is well in tune with Baroque style, textures and spirit. He argues a strong case for the use of the piano in BWV1016, articulates crisply, accentuates expressively and shapes the line elegantly. Yuuko Shiokawa is less musically persuasive, and her shifting ability, intonation and vibrato are sometimes insecure; but she deploys her slender tone largely with grace and sensitivity, and she is appropriately nimble in the two Allegro movements.

Shiokawa sounds happier in Busoni’s expansive Second Sonata, but similar technical and musical criticisms apply. She seems somewhat detached from the musical architecture, even in the final variations, and the tempo of the earlier Presto section is unnecessarily cautious. Even in Beethoven’s elusive op.96 her approach seems rather strait-laced, and one longs in the second movement for more of the fantasy and expression implemented in its predecessor.

The reverberant recording and balance are skilfully engineered and Misha Donat’s liner notes are richly informative, but the omission of the performers’ biographies is regrettable.