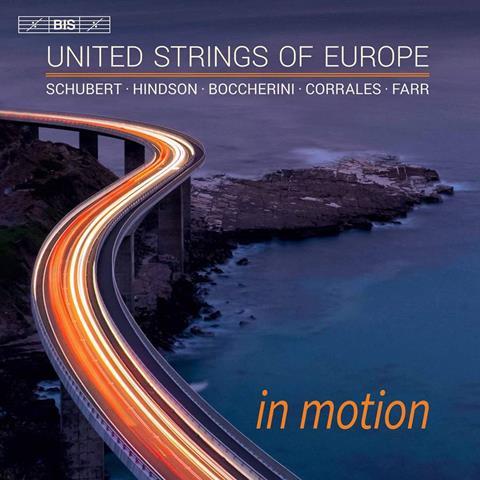 In case its name suggests a large ensemble, it is worth pointing out that the United Strings of Europe employs only a chamber configuration of 4/4/3/2/1. BIS’s velvet-toned, in-depth engineering captures the ensemble’s sound with beguiling warmth, balancing solo, duo and tutti lines with tactile presence. Only two of these pieces are remotely familiar – Schubert’s Quartettsatz, skilfully arranged by violinist–director Julian Azkoul and gaining in amplitude and dramatic thrust what it may lose in terms of the original’s sense of physical struggle, and Boccherini’s Musica notturna delle strade di Madrid, which possesses a refreshing litheness and enchanting sense of intimacy, especially when set beside the purring opulence of Herbert von Karajan’s 1970s outing with the Berlin Philharmonic (DG).

In between comes Australian composer Matthew Hindson’s 2011 Maralinga for solo violin and strings, in which Amalia Hall (a former pupil of Joseph Silverstein and Pamela Frank) evokes the chilling atmosphere at the former nuclear testing site with blazing insight and dazzling virtuosity. Señores, les voy a contar… (2010) by El Salvadorian–Swiss composer Arturo Corrales possesses an unmistakably Latin American vibe and energy, taking us on a helter-skelter ride around his home country’s myths and legends. To finish, New Zealander Gareth Farr’s Mondo Rondo (1997), a bracingly inventive suite in three movements, which climaxes in a riot of mambo-style rhythmic pizzazz.