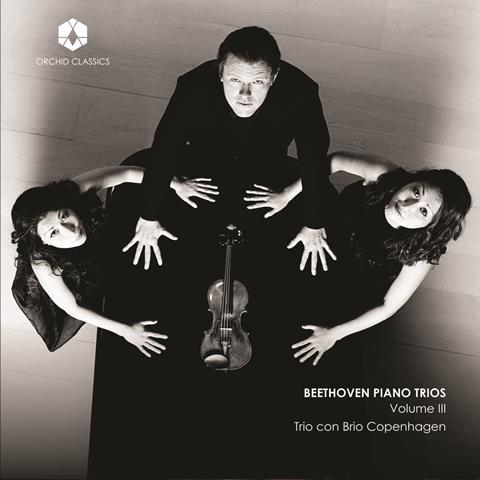 Description: Beethoven the Romantic strains at the leash in these spacious performances

Recorded as if from above, with each member accorded their own space, Trio con Brio Copenhagen captures Beethoven as a Romantic in the making from the first bars of op.1 no.3. Its string-playing sisters deploy some discreet portamento and finely graded vibrato without recourse to the exaggeration that occasionally mars the more storied Faust/Queyras/Melnikov recordings on Harmonia Mundi. The expansive first movement gathers intensity during its development section and puts on the armour of light that would be worn to such revolutionary effect five years later in the First Symphony. I like the minuet’s teasing accents and Jens Elvekjaer’s pearly right-hand flourishes – he’s playing a modern grand, but you could confuse it for a drawing-room fortepiano in the Mendelssohnian trio. The finale fairly leaps out of the blocks: here is the sound of the 18th century straining at the seams.

Considered purely as trio playing, the ‘Archduke’ enjoys no less sophisticated, stylistically up-to-date execution: there is no obvious leader in an ensemble of such alert and creative musicians. I miss, however, a sense of the work’s scale, notwithstanding generous tempos in the first three movements which climax in a deeply felt Andante cantabile. Here, perhaps, the recording keeps us at arm’s length, emphasising the Trio’s care over beautifully finished details of texture rather than taking in broader horizons. For those, turn to Oistrakh and friends – but for Beethoven con brio, look no further.