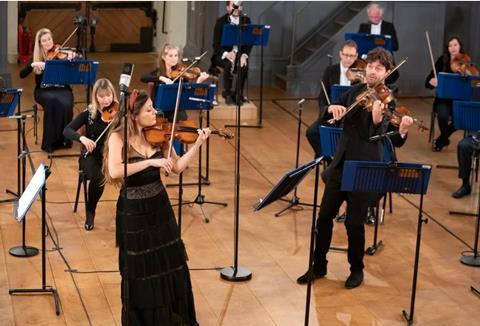 Initial impressions of the ‘Turkish’ Violin Concerto K219 – socially distanced and ill-coordinated ensemble, an occluded acoustic and a hastily applied coat of Mozartian style, as it comes over on the orchestra’s YouTube channel – were swept aside by the soloist’s first entry, which had all the poise and sweetness lacking from the opening tutti. Some entries are still rather grabbed and phrase-ends rushed – this was very obviously a one-off, not a buffed and polished studio product – but then Benedetti is a creature of the moment, extrovert and at her strongest in what sounded like her own cadenza for the first movement, gingered up with Paganinian anachronisms but projecting an authentic mode of soul-bearing soliloquy in public like Fiordiligi in Così or the Countess in Figaro.

Some exaggerated swells and stresses muddied the palette of her tone colours in the slow movement; her folk-like pure tone in the finale’s alla turca episodes would have made an even more effective contrast with the lilting grace of the main theme if the orchestra had followed her lead. There was immediately a livelier sense of dialogue – and well-used rehearsal time – in the Sinfonia concertante K364, where the expressive lead was discreetly taken by Lawrence Power, both in his duets with orchestral winds and with Benedetti’s much brighter violin. The nature of the partnership – the nervous tension of her phrasing answered by his more assuaging evenness of tone – lent affecting immediacy to the slow movement as another scena without words rather than an extended meditation, rising to a cadenza of mountaintop space and silence that not even the down-to-earth finale could spoil.