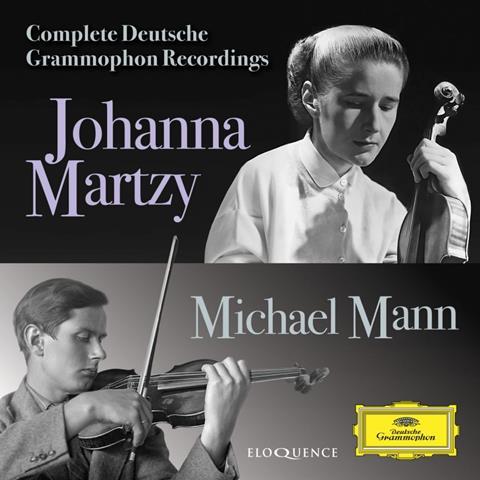 This well-remastered set pays homage to two short-lived string players active around the middle of the 20th century. The blistering opening flourishes of Hungarian violinist, Johanna Martzy (1924–79) set the scene for an uncommonly intense reading of the Dvořák Concerto, backed to the hilt by her compatriot Ferenc Fricsay and his Berlin forces. Martzy’s lively vibrato and springing articulation make for a meaty Mozart Concerto in D major K218, the Joachim cadenzas all of a piece with it. Her long-standing collaboration with Jean Antonietti is remembered in exhilarating readings of sonatas by Mozart (K376) and Beethoven (op.30 no.3) that positively burst from the speakers, and by a discriminating selection of short pieces she included in her recitals.

On their first release, Martzy’s encores were coupled, as they are here, with the Krenek and Honegger viola sonatas performed by Michael Mann (1919–77), son of the celebrated novelist Thomas Mann. All children of that larger-than-life personality had a hard time, but Michael managed to make his independent way as a musician. He was a member of the San Francisco and Pittsburgh Symphony orchestras and had a short solo career before a neuropathic condition forced him to give up playing. An enthusiastic advocate of the music of his time, Mann has a slightly stiff style that well suits the angular lines of Krenek’s classicistic effusions and Honneger’s somewhat morose musings. The light charm of Milhaud’s miniatures is not so much his thing, but he is effectively exuberant in the concluding Parisian Girl.