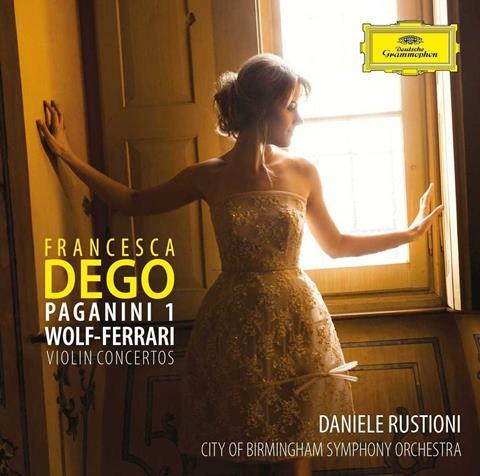 Wolf-Ferrari’s Violin Concerto of 1944 has not exactly suffered from over-exposure either on the concert platform or in the recording studio, so Francesca Dego’s decision to record it live at Birmingham’s Symphony Hall stands as a masterstroke of an attention-grabber. Furthermore, the recorded sound alone would be enough to leapfrog it over the heads of the concerto’s previous three outings on disc, the DG polish being an altogether sleeker affair than that heard on Tactus (Marco Zuccarini), Farao Classics (Benjamin Schmid) and Doremi (Guila Bustabo, the concerto’s dedicatee).

Still, it’s Dego who steals the show, because if any interpretation were capable of lifting this work into the standard repertoire for the first time it would be this one. She movingly draws out its fragile undercurrent – its 19th-century stylistic whispers feeling like a pained yearning for the past from this son of a Bavarian painter and a Venetian noblewoman who found his two countries on opposing sides of World War I – while also delivering on its bravura pep.

The Paganini is equally convincing, thanks in no small part to the CBSO and Rustioni being completely in the zone for frothy drama and display, but also letting it happen naturally through the music’s inbuilt flourishes; Paganini’s ‘more is more’ is in no danger of becoming too much here. Equally from Dego there’s joyful panache but within the context of control: her first entry arrives slender, effervescent and direct, with rubatos of the subtly flirty variety, and with a firm hold of the ducking and diving line. Add her technically en pointe upper-register warmth and sparkle – vital given that both concertos occupy the violin’s highest reaches – and this is a full house of excellence.