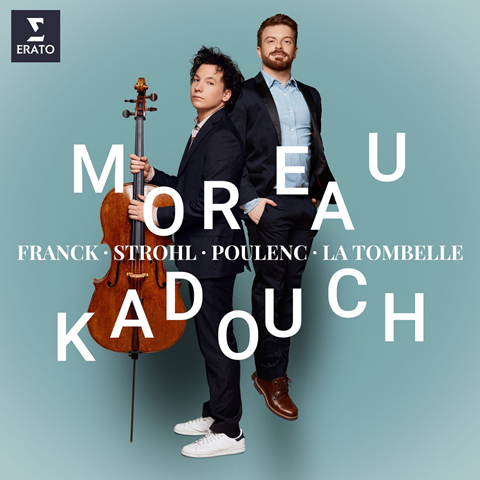 At 24, Edgar Moreau is the latest of a succession of young French cellists to rise to prominence, having won the young soloist prize in the Rostropovich Competition at 15 and second prize in the Tchaikovsky Competition at 17. For his third album he has chosen three sonatas and two miniatures from late 19th- and 20th-century Paris, his home town.

The Poulenc pieces are particularly arresting. After the rather fulsome Grande sonate dramatique by Rita Strohl, which uses a lot of notes and words to not great effect, the conciseness of Poulenc’s Sonata is a breath of fresh air. Moreau and Kadouch get right to the heart of the piece, playing with elegance and an infectious passion. Kadouch’s piano chords in the Cavatine and Moreau’s glissandos, like an elegant yawn, are entrancing.

Their Ballabile is charmingly carefree and skittish, and Moreau’s powerful double-stopping in the finale really makes one sit up and listen. Of the two short pieces, Souvenirs, only published in 2014 and premiered on disc here, is a captivating addition to the cello repertoire. Its ostinato off-beat pedal provides what proves to be a hypnotic bass to the cello’s sultry line, with Moreau tempering his tone with exquisite subtlety. La Tombelle’s gently lilting piece is less memorable.

The Franck Sonata is also played with passion and intensity, although the flow is sometimes interrupted by some rather extreme moments of rubato, especially in the last movement. There are times when the cello does not penetrate the piano’s figurations when playing in a high tessitura in this otherwise well-balanced and warm recording.