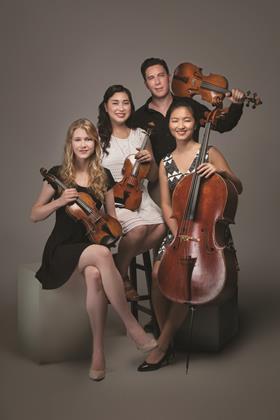 In a preview of its August appearance at the Banff International String Quartet Competition (see next issue), the Ulysses Quartet (right) opened its sold-out Bargemusic appearance with the Allegro molto moderato movement from Schubert’s String Quartet no.15 in G major D887. (At Banff each of the competition’s ten quartets performs a challenge called ‘Schubertplus’, stitching together Schubert with movements from other composers.)

Rather than playing Schubert conventionally, the Ulysses unearthed a composer more athletic and aggressive – buoyed by fleet tempos, with spot-on intonation. And although one longed to hear the group in the entire work, the players had other plans in mind. The Adagio from Shostakovich’s Tenth String Quartet followed, with the players carefully letting the sombre mood unfold. Then, attacca, came the striking opening movement – ‘Landscape’ (Krajina) – of Pavel Haas’s String Quartet no.2 op.7 ‘From the Monkey Mountains’. Capturing its vivid quirkiness, the foursome deployed – as they often did during the hour – close to immaculate phrasing and the kind of chemistry many quartets long for, but rarely achieve.