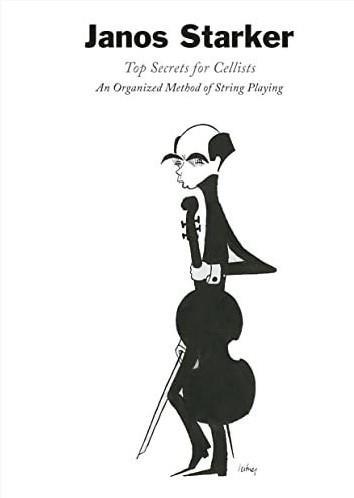 Top Secrets for Cellists: An Organized Method of String Playing

János Starker, one of the world’s great cellists, taught at Indiana University, Bloomington, IN, US, from 1958 until his death in 2013. During that time he became something of a musical celebrity, and in 2004 Indiana University Press published his autobiography, The World of Music according to Starker.

One chapter of this, ‘An Organized Method of String Playing’, in which he describes the principles behind his teaching and playing, has been extracted by a former pupil, Kurt Hess, and turned into this slim volume, half in English and half in Hess’s German translation.

Starker’s right-arm technique and impeccable intonation were legendary, and students flocked to Indiana to study with him. He was a conspicuously unshowy performer but was happy to disseminate his method in a series of seminars, some of which can still be found on YouTube, and in books of exercises.

Starker divided his chapter into four categories: Playing Preparation; Right Arm–Hand–Fingers; Left Arm–Hand–Fingers; and Musical Application. The text in Schott’s volume is small and the content dense, so Hess’s interventions in the way of dividing up the categories still further with sub-titles (delayed slide, finger actions etc) are very welcome. There are no diagrams and no musical examples, which at times might make Starker’s descriptions easier to understand. However, he deliberately avoids the use of scientific terms and, with a bit of physical acting-out of the actions he is describing, enlightenment does come.

There is lots of value here, born of Starker’s decades of experience as a teacher and world-class performer, and of deep analytical thought. It is interesting to read his views on the different types of endpin and his prediction that in the future the thumb will go under the fingerboard in the highest positions and the fourth finger come back into play – really?

The forensic analyses of exactly what happens in legato bowing, down to the action of each finger in the bow hold, and in different types of left-hand shift are masterly, and the whole book should provide plenty of inspiration for both teachers and performers. The text is interspersed with some beautiful full-page black-and-white photos of Starker at different points in his career.