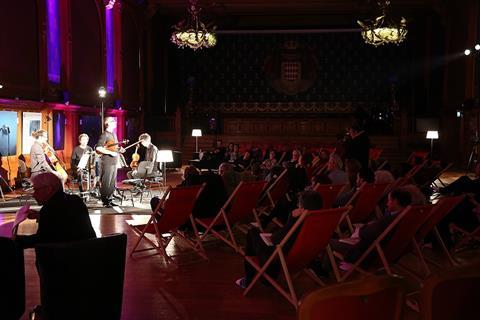 The Quatuor Béla prepare to settle into the Feldman marathon

A few minutes after 7pm in a grand but darkened room of Monaco’s hilltop Oceanographic Museum, viola player Julian Boutin concludes a brief concert introduction with an ‘Alors, à demain’. He settles in opposite his colleagues of the Quatuor Béla: they are arranged in a circle so that he and second violinist Julien Dieudegard face away from an audience that, indeed, they won’t see again until midnight. The group then works conscientiously and unfussily through Morton Feldman’s second String Quartet, a surgical team over their patient, rising without a break only some five hours later.

The single-movement piece has a certain notoriety on account of its duration and relentless placidity, meaning that this performance at the Festival Printemps des Arts de Monte-Carlo is a rare opportunity to hear it live and complete – the piece did not even get its full-length premiere (by the FLUX Quartet) until 1999, after the first, abridged, performances by the Kronos Quartet in 1983 and 1984. And while the festival, directed by composer Marc Monnet, does not shy away from modern or thorny repertoire – Charles Ives is a featured composer this year – it’s fair to say that the organisers are somewhat nervous about attracting an audience for this concert. After all, this is one piece where even the regular concert-goer will probably have little idea how tolerable the experience will be and where the escape routes are.

Consequently, deckchairs and spacious armchairs are advertised (I ignore the false promise of comfort of the former and go for the latter); attendees will be able to wander out and back in at any point to fortify themselves with the drinks and snacks provided, and we are given hotel slippers to muffle the sound. But people do come, around 50 at a guess, and the event is sufficiently remarkable that Monaco’s monarch, HSH Prince Albert II and his sister, HRH Caroline, Princess of Hanover are present. It was their mother, the former Hollywood actor Grace Kelly, Princess of Monaco through her marriage to Prince Rainier III, who had the idea for setting up the festival in 1970. Princess Caroline continues as its president today.

There’s no denying that Feldman’s piece is almost universally quiet, unfailingly slow-moving and without much in the way of melody

In the end, the vast majority of the audience do leave at some point, and most return, thereby avoiding the organisers’ other fear: assembling an audience only to see it entirely trickle away. Not wanting to miss any of the inaction, I remain in the room throughout. Of course, ‘inaction’ is an exaggeration: there is not nothing happening here. But there’s no denying that Feldman’s piece is almost universally quiet, unfailingly slow-moving and without much in the way of melody except for a couple of four-note motifs that intervene from time to time. There are no circus tricks or gimmicks either, unless you count the mechanical page-turners the players use, made necessary by the infrequency of long rests in the music.

The fact that the musicians play almost constantly also means they are able to take a drink of water barely a handful of times – is it my imagination that Boutin, playing alone at one point later on, oh-so-discreetly takes his time over a later instance of those melodic motifs to give the other three a tiny bit more time to do so? That’s another reason not to disparage the music for its simplicity: it would denigrate the precision and physical control of the players, with the cellist Luc Dedreuil having to pull out a passage of alternating stopped harmonics at the very end that must have been arduous to maintain. Each section of the piece has its character, and music that seems euphonious or hypnotic at one point is soon replaced by something that, while still delicate, is less obviously pleasing. In that light, the fact the concert is taking place in a natural history museum is rather apt: the piece resembles a series of curiously abstract but organic exhibits. Having little else to do, one examines each one, then passes on to the next.

Perhaps that is why I don’t find listening to the music quite the euphoric, trance-like experience of oblivion that I might have imagined it was going to be. I find myself actively listening: that might be by consciously focusing on some element or other of the quartet’s playing; it might be by adopting strategies like picking out the notes of chords or the changing permutations of notes in a sequence. To echo Boutin, who had described the piece in his introduction as ‘Comme un haïku, mais très long’, it was, in other words, like listening to a string quartet. Just a long one. With no slow movement.