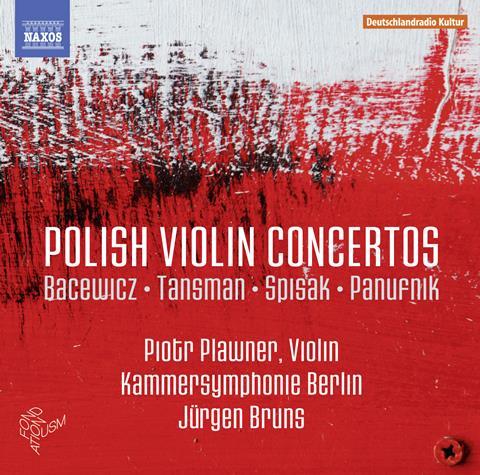 An important addition to the discography of these works Strictly speaking, these aren’t all concertos as such – Alexandre Tansman’s Five Pieces of 1930 (written for Szigeti) and Michal Spisak’s Andante and Allegro of 1954 don’t aspire to those heights. Nevertheless, this is a substantial contribution to the violin discography, with those more suite-like works framed by the first of Bacewicz’s seven violin concertos of 1937 and the single example by Andrzej Panufnik, written for Menuhin in 1971. Piotr Plawner’s playing throughout is lithe and engaging. He has fun with the playfulness of the Bacewicz, with its sly, quick changes of mood and perky themes, and he’s especially adept at the high-lying melodic skeins of Tansman’s ‘Chanson’ and ‘Aria’. He makes the Stravinskian fast movements of that work catchy, too, and exploits the similar idiom of the Spisak (who, like Bacewicz, was a pupil of Nadia Boulanger). The Panufnik is the most serious work here and Plawner brings a searching, exploratory sense to his playing of the first two movements and fizz to the finale. He seems unfazed by the recorded competition, not least from Menuhin himself (EMI), but makes his own distinctive mark on the work. The Berlin Chamber Symphony Ensemble provides crisp, exemplary accompaniments, and recordings are well balanced and clear, though gaps between tracks and pieces are impossibly brief.