Why are string players today so afraid to use portamento?

Composers expected it and the music itself seems to demand it. Tully Potter argues for a return to swoops and scoops 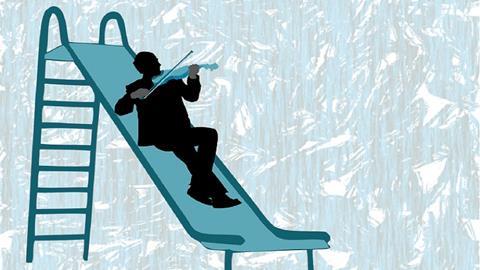 Two of the most basic characteristics of both singing and string playing are legato and portamento. They are intimately connected – indeed, connection is what portamento is all about – but for the past 50 or 60 years, many string players have misguidedly tried to avoid any kind of slide. W.S. Gilbert would call this kind of idiocy ‘good taste misplaced’.

Certainly, any string music written in the hundred years up to 1945 requires the use of portamento – even such ‘modern’ composers as Ravel and Bartók would never have encountered a violinist, violist or cellist who did not practise it. Had they realised performers who wholly misunderstood their music would come along, these two pernickety characters would no doubt have marked their scores even more meticulously.

Much of the time, when we speak of portamento we are thinking of the downward slide or swoop. But the upward slide, or scoop, is often valuable as a means of giving a lift to the rhythm, as vital in slow music as in fast. Portamento or glissando can even be used as an embellishment – listen to the way the cellist Emanuel Feuermann plays the finale of Schubert’s Arpeggione Sonata. Is it not exhilarating? We have become so po-faced in both our execution and our appreciation of music that no one would dare to do anything like it today.

I cannot believe that portamento was not in use even before the Romantic era. Would Mozart have played the Adagio of his G major Violin Concerto without slides? The phrases positively demand them, and in Leonid Kogan’s beautiful recordings we can hear perfect execution of both downward and upward portamento. There are similar passages in Bach, Handel and the Baroque Italians. The beginning of Beethoven’s B flat major Quartet op.130 sounds so much more convincing if the phrases are joined up, as they are by the Busch Quartet.

When I play friends the 1928 recording of Nedbal’s beautiful Valse triste by the Š evcík Quartet, in the arrangement by the group’s second violinist, laughter is often the response. I must admit that the players’ left hands are so constantly on the move that they are hardly in one place for more than a millisecond; yet the tuning is lovely, and the overall effect is uniquely evocative of its period. Less extreme but equally valuable lessons in portamento can be heard on the Musical Art Quartet’s disc of Annie Laurie, arranged by the players’ violist friend Lillian Fuchs, and the two Christmas carols recorded by the Flonzaley Quartet in arrangements by its second violinist.

As I see it, the great players of the past used downward portamento in three ways: for transport from one note to another; for joining up the notes into a coherent phrase, as a singer would do (hence the expression ‘breath glide’); and for expressing spontaneous emotion. I suppose it is this expressive portamento that attracts the most opprobrium today, and I have to concede that Huberman sometimes executed it in an ugly way. Tertis at times went too far on the viola, Sammons on the violin – although I love them both dearly. For my taste, Kreisler, Busch, Thibaud, Szigeti, Morini and Casals all managed it pretty well. The old-timers often avoided the even-numbered positions and worked on the principle of ‘one phrase, one colour, one string’, a maxim that still has validity. String playing has undeniably progressed since the dawn of recording, yet we should not throw out the connective-portamento baby with the expressive-portamento bathwater.

I would be happy to rest my case on three violinists. Fritz Kreisler had a sublime feeling for portamento, through which he contrived to transport us straight to the heart of Vienna. David Oistrakh played with such expansive generosity that it was inevitable portamento would form part of his armoury, yet his playing always had a kind of nobility. Perhaps the finest master of portamento, however, was Jascha Heifetz, and the better he knew the music he was playing, the more portamento he employed (try his solo Bach – the D minor Partita, which he performed most often, features the most slides). You do not have to go along with everything that Heifetz did, and I do not. But when it comes to portamento, he led the way.

This article was originally published in the October 2016 issue of The Strad. Click here to subscribe or login. Alternatively, download on desktop computer, or through The Strad App.